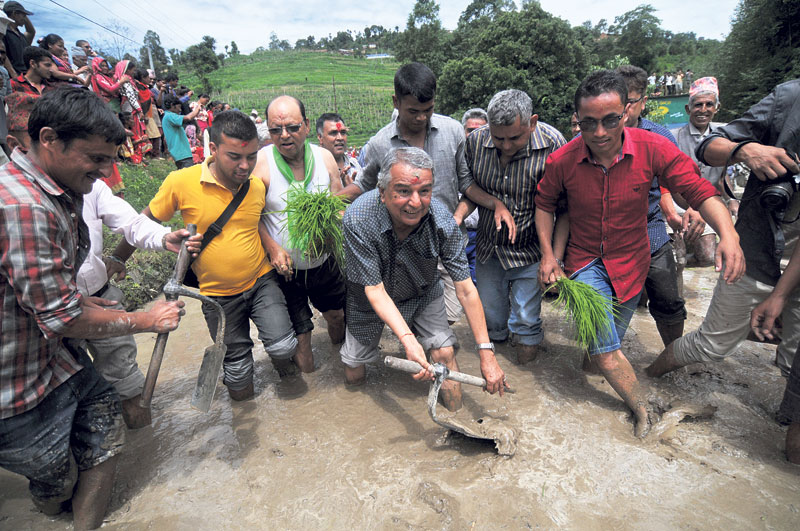 BANEPA, June 29: National Paddy Day celebration is becoming a mere ritual, as neither the government nor the political leaders are doing anything toward increasing production of paddy and addressing woes of farmers.

Speaking at the program, Gautam underlined the need to adopt modern technologies to boost productivity. Similarly, Paudel also assured local farmers that his party will help in mechanization of agriculture sector.

“The speech of minister and political leaders has remained the same over the past decade,” a farmers’ leader, who hails from Bhakundebesi, said. “Local farmers are introducing new technologies on their own.”

Paddy contributes about on fifth of country’s total agriculture production which accounts for 31 percent of country’s GDP.

Government officials also say that no sincere efforts have been put to increase paddy production. “We need to brainstorm on what needs to be done to boost paddy productivity in the coming years,” Govind Sharma, director of Hasara-Based Agriculture Research and Training Center, said. Reduction in paddy plantation areas with every passing year is worrying government officials like Sharma. He also said failure to introduce new variety of paddy seeds is making the country dependant on China and India for paddy seeds.

“As paddy is a water-intensive crop, impacts of climate change and global warming have affected its productivity,” Deepak Paudel, senior officer at District Agriculture Development Office, Kavre, said. He further added that local farmers themselves are adopting innovative means to increase productivity.

“Krishna Prasad Timilsina of Panauti produced a record 8 tons per hectare of Khumal-4 paddy two years ago by adoptive innovative means to boost productivity. He was honored with National Farmer Award,” Paudel added.

The previous record was 6.3 tons per hectare.

Local farmers have also started production of paddy seeds. Seeds produced in Kavre are being supplied to as far as Sindhupalchowk, Ramechhap and Dolakha districts. The district produced 60 tons of paddy seeds of different varieties last year.