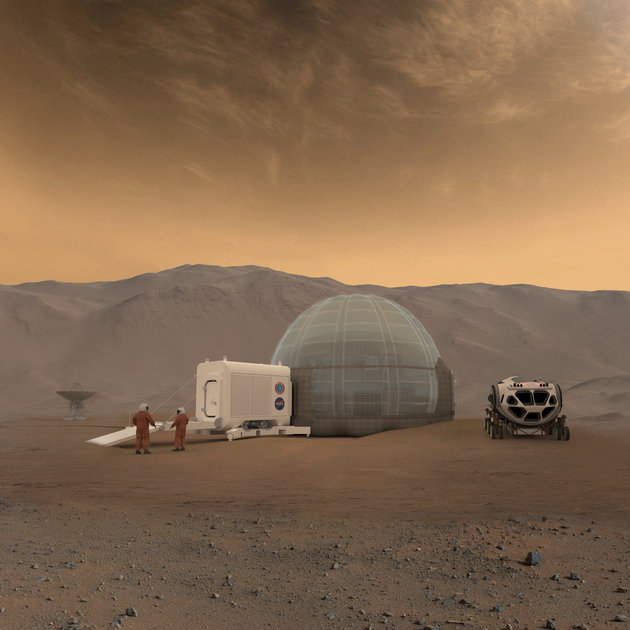 NASA has unveiled a bold new concept to house astronauts on the Red planet, as the space agency continues the push toward its goal of sending humans to Mars by the 2030s.

Keeping in mind the extreme temperatures and atmosphere on Mars, researchers at NASA’s Langley Research Center in Hampton, Virginia have found ‘ice’ is the best material for building a home on Mars.  Further, the space agency wants to make use of a resource the planet already has in abundance.

The proposed concept dubbed “Mars Ice Dome,” which was selected through the Space Technology Mission Directorate’s (STMD) Center Innovation Fund is one of the many possible concepts for habitation on Mars.

“After a day dedicated to identifying needs, goals and constraints we rapidly assessed many crazy, out of the box ideas and finally converged on the current Ice Home design, which provides a sound engineering solution,” said Langley senior systems engineer Kevin Vipavetz.

The “Mars Ice Home” is a large inflatable torus, a shape similar to an inner tube, that is surrounded by a shell of water ice. The design has several advantages that make it an appealing concept. It is lightweight and can be transported and deployed with simple robotics, then filled with water before the crew arrives. It incorporates materials extracted from Mars, and because water in the “Ice Home” could potentially be converted to rocket fuel for the Mars Ascent Vehicle, the structure itself doubles as a storage tank that can be refilled for the next crew, the space agency said.

All of the materials selected are translucent, so some outside daylight can pass through and make it feel like you’re in a home and not a cave.

Selecting materials that would accomplish these goals was a challenge for materials experts. Researcher Sheila Ann Thibeault said, “The materials that make up the ice home will have to withstand many years of use in the harsh Martian environment, including ultraviolet radiation, charged-particle radiation, possibly some atomic oxygen, perchlorates, as well as dust storms – although not as fierce as in the movie ‘The Martian’.”

Last year, US President Barack Obama vowed to help send people to Mars within the next 15 years, pledging to work with private companies to “to build new habitats that can sustain and transport astronauts on long-duration missions in deep space.”