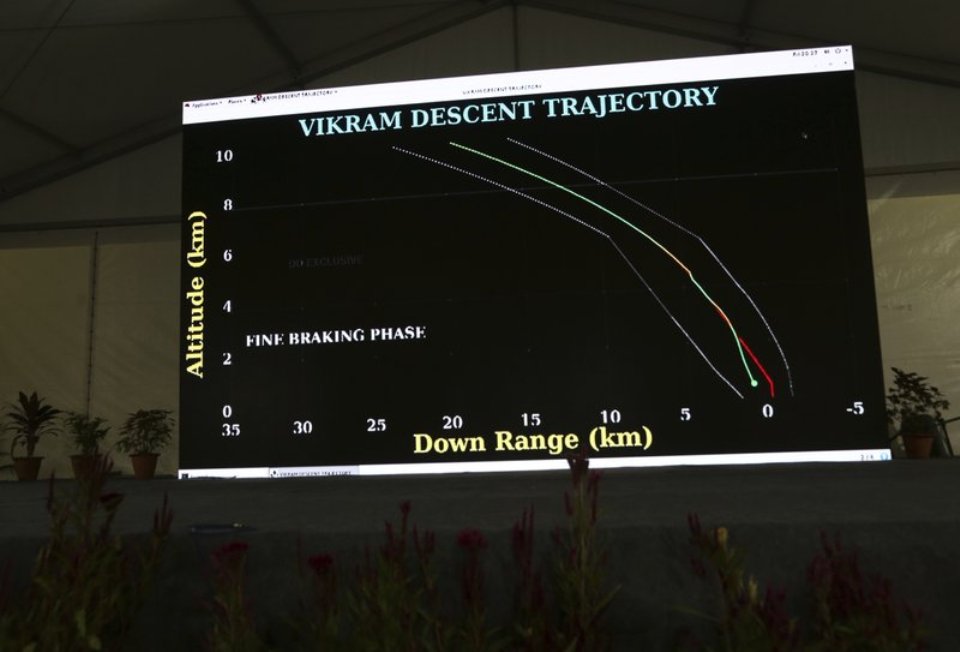 FILE - In this Saturday, Sept. 7, 2019, file photo, trajectory graphics of India's unmanned spacecraft are displayed on a big screen at a media center set up at Indian Space Research Organization (ISRO)'s Telemetry, Tracking and Command Network facility in Bangalore, India. NASA said Tuesday, Dec. 3, that it has found the debris from India's moon lander, which crashed on the lunar surface in September. India's space agency lost touch with the Vikram lunar lander after it crash landed during its final approach to the moon's south pole to deploy a rover to search for signs of water. (AP Photo/Aijaz Rahi, File)

NEW DELHI, Dec 3 : NASA said Tuesday that it has found the debris from India’s moon lander, which crashed on the lunar surface in September.

The U.S. space agency released a photo showing the site of the lander’s impact and the debris field, crediting an Indian engineer for helping locate the site.

The engineer, Shanmuga Subramanian, said he examined an earlier NASA photo to locate the debris.

The space agency said in a statement that Subramanian first located the debris about 750 meters (half a mile) northwest of the main crash site.

“It took days of work to find the crash site,” Shanmugham said. “I searched around the north of the landing spot and found a small little dot. When I compared it to the Lunar Reconnaissance Orbiter images of the site from the last nine years, I located the debris and reached out to NASA.”

The 33-year-old engineer announced his discovery on Twitter on Oct. 3, after which NASA performed additional searches in the area and made an official announcement.

The space agency said that after receiving Subramanian’s findings, its team “confirmed the identification by comparing before and after images.”

NASA also said, “Despite the loss, getting that close to the surface was an amazing achievement.”

India’s space agency lost touch with the Vikram lunar lander after it crash landed during its final approach to the moon’s south pole to deploy a rover to search for signs of water.

A successful landing would have made India just the fourth country to land a vessel on the lunar surface, and only the third to operate a robotic rover there.

KATHMANDU, Mar 9: The Government of India is supporting reconstruction of 50,000 houses in earthquake affected districts of Gorkha and... Read More...