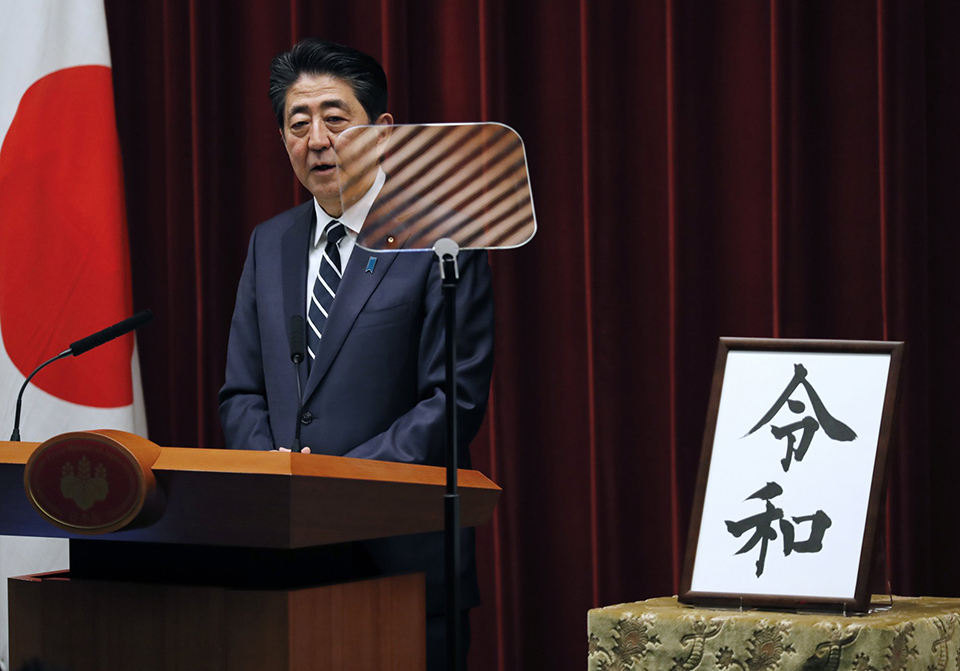 The “Heisei” era ends with Emperor Akihito’s abdication on April 30 and the new era starts May 1. The era name is widely used in official documents in Japan and has everyday references such as in non-Western calendars or when people speak of belonging to a generation.

The name for the first time in the history of imperial era naming draws from a Japanese text — a 7th century poetry collection “Manyoshu.”

Abe said the two letters of script were taken from a poem about plum blossoms and the era name means that “culture is born and nurtured as the people’s hearts are beautifully drawn together.”

The choice, kept strictly secret ahead of Monday’s announcement, was a break from nearly 1,400 years of drawing era names from Chinese classics. Abe said “Manyoshu” is Japan’s oldest collection of poetry written not only by royals but ordinary people, and it was only appropriate to choose the name from the purely Japanese book that symbolizes Japan’s rich culture and tradition.

The letters portray “Japan’s unique national identity, such as everlasting history, its fragrant culture and four seasons that bring beautiful nature, and firmly hands them down to the next generation,” Abe said. He said the government chose the name Reiwa “with hopes of making Japan a nation where every person can achieve dreams, like the plum flowers that bloom beautifully after the severe winter to signal the start of the spring.”

The break with the tradition of using Chinese sources was expected from Abe’s ultra-conservative government, often hawkish on China matters. Abe and his strongest supporters have campaigned to bolster Japan’s national pride, which they say was lost because of war guilt taught during the U.S. occupation after Japan’s World War II defeat. Abe has been also pushing to restore authoritative image of the emperor.

“We hope (the era name) will be widely accepted by the people and deeply rooted as part of their daily lives,” Chief Cabinet Secretary Yoshihide Suga told reporters in announcing the name, which was written in two Chinese characters in black ink calligraphy on a white background.

The announcement allows only a month for government, businesses and other sectors to adjust to the change that still affects many parts of Japan’s society, even though the system is not compulsory and the emperor has no political power under Japan’s postwar constitution.

Under a 1979 law, a panel of experts on classical Chinese and Japanese literature was appointed in mid-March to nominate two to five names that met strict criteria such being easy to read and write but not common or a previous era name.

The nominations were presented first to nine outside experts, including Nobel Prize-winning stem-cell scientist Shinya Yamanaka and award-winning novelist Mariko Hayashi, to present their views and narrow the selection Monday before final approval by the Cabinet.

While a growing number of Japanese prefer the Western calendar over the Japanese system in a highly digitalized and globalized society, the era name is still widely used in government and business documents. Elders often use it to identify their generations.

Discussing and guessing new era names in advance was not considered a taboo this time because Akihito is abdicating. Era name change is also a time for many Japanese to reflect on the outgoing and incoming decades.

Office worker Yoshiko Sugita, 50, said she liked the name’s second character “wa,” which means peace or harmony: “I hope that harmony and peace will also continue in this new era.” Hiroaki Ando, 56, who works in apparel industry, said “I hope that the era will continue to be bright.”

Akihito’s era of Heisei, which means “achieving peace,” was the first without a war in Japan’s modern history, but is also remembered as lost years of economic deflation and natural disasters.

Heisei was the first era name decided by the government under the postwar constitution and the emperor had no say over the choice. Still, the government, with its highly secretive and sensitive handling of the process, is underscoring that “the emperor has power in an invisible, subtle way,” said Hirohito Suzuki, a Toyo University sociologist.

Era name changes are creating businesses for both the outgoing and the incoming. Anything dubbed “last of Heisei” attracts Akihito fans, while others are waiting to submit marriage certificates or filing other official registration until the new era starts. Analysts say the era change that expands the “golden week” holiday to 10 days on May 1 could buoy tourism and other recreational spending.

TOKYO, May 1: Japan's new Emperor Naruhito has formally ascended the Chrysanthemum Throne, a day after his father Akihito abdicated from the... Read More...

No matter how hard Abe tries, the US and Japan remain divided on the same issues as always ... Read More...