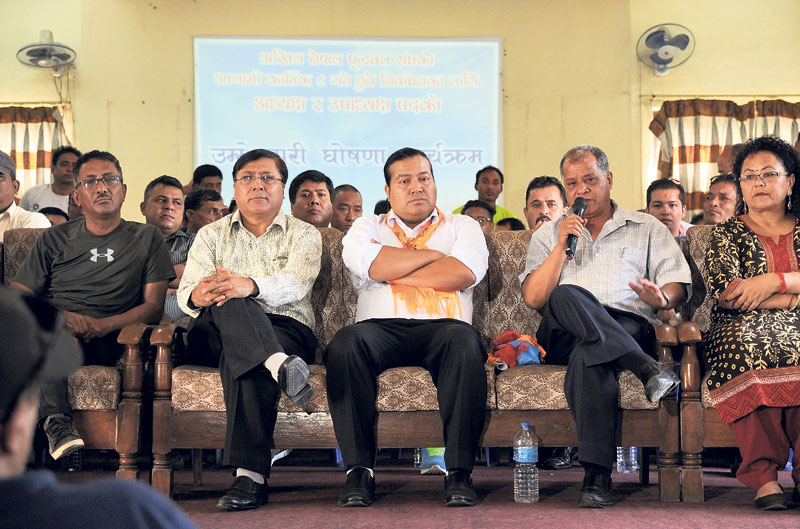 Speaking at a press conference organized to announce his candidacy, Shrestha said,  “I have spent 20 years of my career contributing to Nepali football. So I think I deserve the next one-year tenure to work as ANFA president.” Shrestha is currently the acting president of the football governing body of Nepal..

Shrestha has been at the helm of ANFA since the suspension on its long-serving president Ganesh Thapa on November 16 last year for misconduct during his tenure. “Currently, I am working as acting president and in the past I had worked in different posts of ANFA. I have always given my best for the development of Nepali football in whatever post I worked,” said Shrestha, who is a former president of NRT and a former player of the club. During his heydays, Shrestha played professional football for NRT for ten years.

Revealing the contents of his letter of resolution, Shrestha said that ANFA will focus on development of the grassroots football during his tenure if he gets elected as president. He also pledged to implement the development projects provided by FIFA to Nepal  in different districts not just in Kathmandu.

His other resolutions include preparing the national team for the upcoming AFC Solidarity Cup and SAFF Championship with the target of winning the tournaments, organizing regular international friendly matches for the national and age-group teams, production of referees, conducting referee courses.

He has also promised to keep the infrastructure development on his priority list and to rerun the ANFA technical centers of Dharan and Butwal. However, he hasn't said anything about conducting the A Division League on time.

Kunwar, who announced his candidacy for the post of vice-president on the same occasion, said that they will start the tradition of awarding a district football association for its good work and also make the regional football associations stronger.

The candidates claimed that they have support from 20 district associations and 10 clubs. However, they provided the names of just 18 districts.

According to the ANFA statute, the one who registers his candidacy for the post of president needs five proposer and five seconder but they didn't disclose those names.

Beside Narendra Shrestha, Karma Tsering Sherpa, president of A Division club Himalayan Sherpa, is also running for the post of president in the elections. Representatives from FIFA and AFC will attend the election as observers.