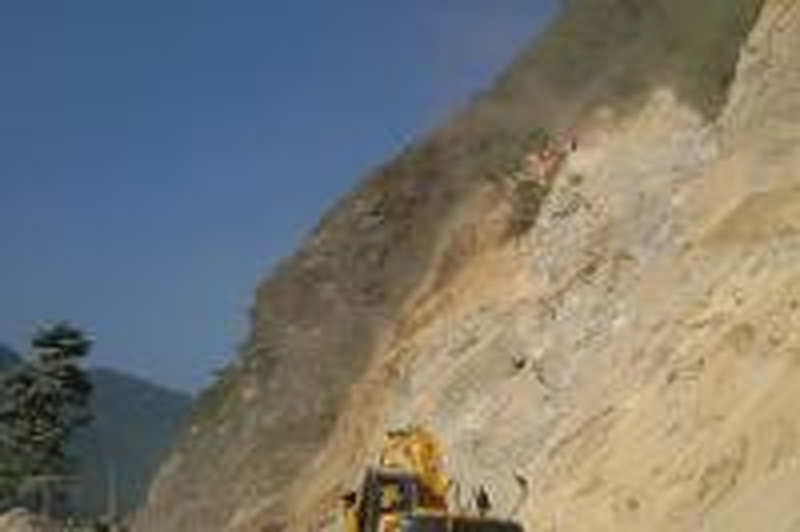 CHITWAN, August 3: Kiran Pandey, 25, was returning home to Aam Chowk of Ilam district after three years of foreign employment in Dubai. He had brought clothes and chocolates for kids and some home necessities with the hard-earned money that he earned by sweating in a foreign land. On the way home on Wednesday, the bus he was traveling in (Na 6 Kha 7121) met an accident along Narayanghat-Mugling road section and he narrowly escaped death.

However, he lost all of his luggage and belongings he had brought for his family and relatives. In the name of road-widening, the Narayanghat-Mugling road has become a deathtrap for travelers that travel through the route. The expansion along the road has been a major reason behind the now frequent landslides. So far, five people have lost lives while many others like Pandey experienced near-death experience.

“I don't know if this news reached my home. If it did, my family must have been worried to death,” Pandey told Republica through the telephone. He said the accident on Wednesday was averted narrowly due to luck.

Assistant to the bus's driver, Netra Baral, recalled the horrifying events that led to the point where their bus was crushed by the landslide and how they were able to save the lives of their passengers. “A truck in front of us got stuck, and a jeep behind it prevented it from making any movements. Suddenly, lots of mud and stones started falling down on the jeep. We noticed it from the bus and told our passengers to get out of the bus. All of us got off hurriedly from the bus without even having time to grab our belongings. After reaching a few meters away from the bus, the landslide hit the bus swept it down the cliff,” he recalled.

There were 25 passengers on the bus. “Had we not noticed the mud falling and had we delayed hurrying the passengers out of the bus, all of us would not have been alive to tell the tale. We narrowly escaped death,” added Baral.

According to Narayanghat-Mugling Road Project, there have been 141 cases of landslides on the road section following the initiation of the expansion project. Those accidents have claimed five lives, while one has disappeared and four persons have sustained injuries. The landslides have hit and destroyed 21 vehicles, informed the project office.

The 36-km road is prone to landslides in 29 places. Of these the most dangerous area is the four-kilometer Mugling-Kalikhola-Topekhola stretch.

The expansion project had commenced in April 2015, with a two-year deadline to finish it. However, only half the work has been completed so far.

Prime Minister Sher Bahadur Deuwa had recently monitored the condition of the road. He sought ways to minimize the landslide risks and instructed to finish it as soon as possible.

Archaeologists have uncovered new evidence that indicate that early humans were behaving more sophisticatedly, even involved in trading around 100,000... Read More...

Twitter needs to sell now or risk becoming another Yahoo

SAN FRANCISCO, Sept 25: Twitter, which was once a darling of the tech industry and went public almost three years... Read More...

Cabinet meeting: Japan's grant of up to Rs 2.61 billion accepted
56 minutes ago