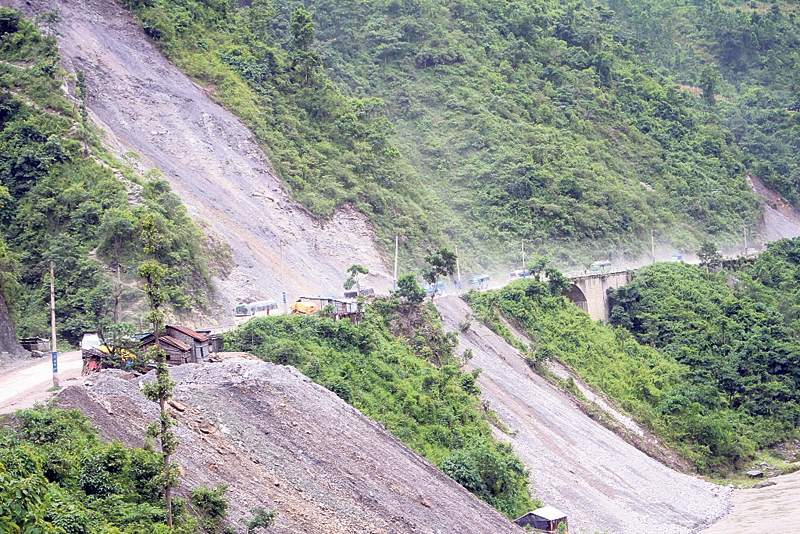 CHITWAN, Jan 2: The ongoing road expansion task along the Narayangadh-Muglin road section has failed to take a momentum though vehicular traffic is halted for four hours daily, causing inconvenience to commuters.

The road section is closed to traffic for four hours daily to facilitate the road widening works. This section of the road is being widened by digging the hillside along around two kilometers. The traffic is obstructed 11:00 am to 3:00 pm everyday from December 22 for the same.

Project Engineer Shiva Khanal said that the task of digging the hillside has not taken a momentum as the four-hour road closure was not sufficient. "The four hours during which the road is closed is a short time for the road widening work and the traffic-jam after the resumption of traffic is also causing some obstruction," he explained. The local administration has given permission to close the traffic only for four hours instead of eight-hour demanded by project.

Chief District Officer of Chitwan, Narayan Prasad Bhatta, said that many vehicles operate along the road section in the name of carrying essential goods, and this trend would be
stopped immediately.

He added that road expansion drive would be completed soon even by extending the time for the same.

CDO Bhatta said, "I will make further decision to expedite road widening drive by carrying out onsite visit along with the project chief, contractors of the road section, consultants and security bodies today itself."

Six thousand and 177 vehicles ply on the road section every day, as per the survey carried out by the Planning and Design Division of the Department of Roads. RSS

KATHMANDU, Jan 26: Despite his disability, fifty-year-old Bel Gurung of Khumaltar, Lalitpur was never a burden to his family members as... Read More...

CHITWAN, Aug 12: The policy of encouraging merger among cooperatives has not made much impact in the district. ... Read More...