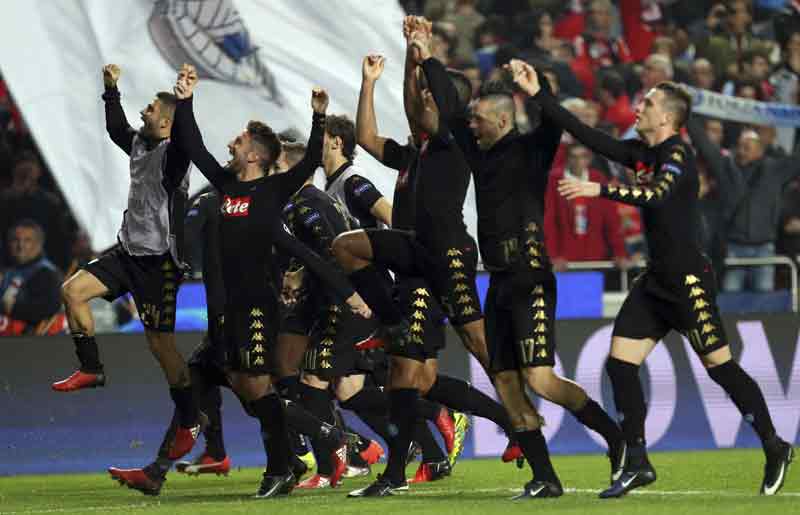 Napoli players celebrate their victory after the Champions League group B soccer match between Benfica and Napoli at the Luz stadium in Lisbon, Tuesday, Dec. 6, 2016. Photo Courtesy: AP

MILAN, Dec 7: In the only group on Tuesday where qualification for the Champions League knockout stages was still to be decided, Besiktas crumbled under the pressure, allowing Napoli and Benfica to progress.

Napoli and Benfica had eight points going into their Group B match, one more than Besiktas, which was playing at already eliminated Dynamo Kiev.

However, the Turkish side fell to a shock 6-0 defeat in a match which saw it finish with nine men. Napoli won 2-1 at Benfica to win a Champions League group for the first time.

"We had already been burned once by looking at the result of the other match," said Napoli coach Maurizio Sarri, whose team had squandered earlier chances to qualify for the last 16. "So, it really hardly mattered to us what was happening in Kiev. We wanted first place to make Napoli history."

Elsewhere, Arsenal topped Group A following its 4-1 win at Basel after Paris Saint-Germain could only draw 2-2 at home to Ludogorets.

Atletico Madrid had already secured first place in Group D but lost its perfect record in a 1-0 defeat at Bayern Munich. The final positions in Group C had already been decided and Barcelona beat Borussia Moenchengladbach 4-0, while Manchester City drew 1-1 against Celtic.

Getting a rare start, the Spanish forward gave Arsenal a three-goal lead by the 47th minute as the visitors coasted to victory.

Mistakes cost Paris Saint-Germain dearly as it missed out on top spot in Group A following a late 2-2 home draw with Ludogorets — an unheralded Bulgarian side that had not won any of the previous five group games.

Dutch forward Virgil Misidjan scored in the 15th minute and Brazilian forward Wanderson made it 2-1 in the 68th, shortly after Edinson Cavani had leveled for PSG.

Winger Angel Di Maria saved face for PSG in the second minute of injury time with a scuffed shot, and Cavani was desperately close to grabbing the winner in the final seconds.

It was meant to be a battle to advance in Lisbon but it turned out to be a shootout for top spot as Besiktas collapsed in Ukraine.

Napoli won 2-1 at Benfica but both teams qualified for the knockout stage after Besiktas fell to a surprise 6-0 thrashing at Dynamo Kiev.

Substitute Dries Mertens changed the match after coming on in the 57th. The Belgium international set up the opener for Jose Callejon on the hour mark before securing the win in the 79th.

In Ukraine, Dynamo's star winger Andriy Yarmolenko started the night's torment for Besiktas with smart footwork on the byline and a cross to the far post for Artyom Besedin to score the ninth-minute opener.

Besiktas looked lively for the next 20 minutes until defender Andreas Beck was dismissed for a collision with Derlis Gonzalez, who was through on goal for Dynamo. Yarmolenko scored the resulting penalty and Vitaliy Buyalskiy soon made it 3-0 with a lobbed effort after a Besiktas defensive mix-up.

A deflected shot from Gonzalez provided Dynamo's fourth in first-half stoppage time. Serhiy Sydorchuk and Junior Moraes added to the scoreline after Besiktas striker Vincent Aboubakar was red-carded for a second offense.

Lionel Messi opened the scoring in Barcelona's 4-0 win over Borussia Moenchengladbach, but fell short of matching Cristiano Ronaldo's goal record in the group stage of the Champions League.

Messi struck his 10th group-stage goal this season, one less than the 11 netted by Ronaldo with Real Madrid last season to set the record.

Kelechi Iheanacho began his month-long stint as Sergio Aguero's replacement by scoring Manchester City's equalizer in a 1-1 draw against Celtic.

Iheanacho drove a rising shot into the roof of the net in the eighth minute to cancel out a fourth-minute goal by winger Patrick Roberts, who is four months into his second straight season-long loan at Celtic from City.

Robert Lewandowski curled in a spectacular free kick to give Bayern Munich a 1-0 win over Atletico Madrid but the Spanish side still won the group, finishing with 15 points to Bayern's 12.

By holding PSV Eindhoven to a 0-0 draw, newcomer Rostov clinched third spot and a place in the Europa League.

MOSCOW, July 4:  England finally overcame nearly 30 years of penalty pain when they beat Colombia 4-3 in a shootout on... Read More...