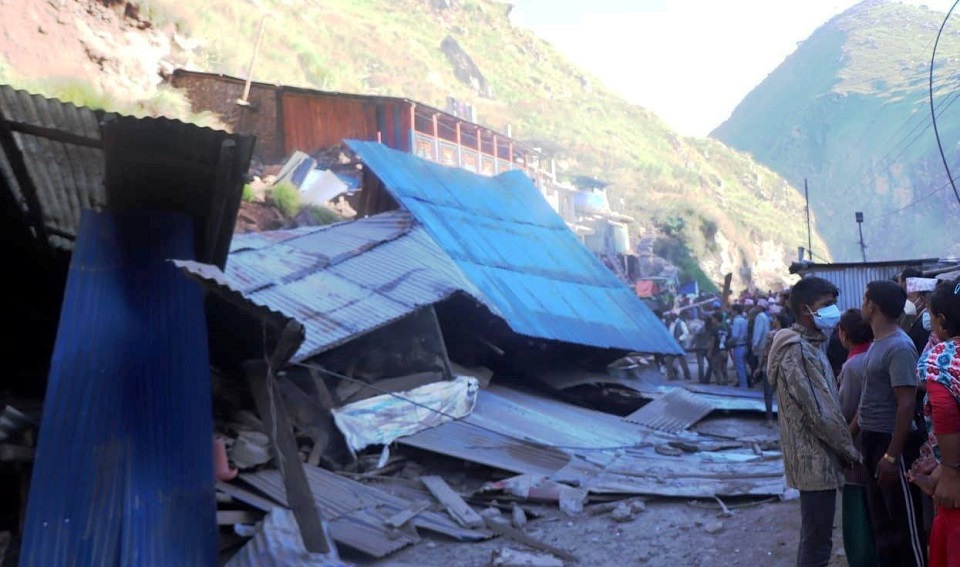 KHALANGA, Aug 31: Ten persons, including four members of the same family, died as four houses collapsed in a dry landslide that occurred at Nagma bazaar in Tilagufa Municipality-1, Kalikot, on Sunday. Two more people are still unaccounted for in the disaster that occurred at 7:00 am. Nagma bazaar is at the border of Jumla and Kalikot district.

Deputy Superintendent of Police, Shyam Oliya of the District Police Office said that the house of local Prayag Shahi had collapsed in the landslide. Two people who were rescued from the site have been taken to the Karnali Academy of Health Sciences in Jumla for treatment.

The houses of Lali Nepali, Mandir Katuwal, Dhanapati BK and Bir Bherikar collapsed due to the landslide. Six dead bodies were retrieved  at 7 pm on Sunday.

Forty-year-old Prayag, his seven-year-old daughter Hima, five-year-old son Nirajan Shahi and two-year-old son Akkal Shahi died in the incident. The Shahi family from Shuvakalika Rural Municipality-7 had been living in Nagma bazaar doing business. Prayag’s wife Punni Shahi and Arjun Hamal were rescued from the landslide and they are receiving treatment at Karnali Academy of Health Sciences. Their health condition is normal, according to sources.

The police said that the identity of those missing in the landslide is not ascertained so far and a search for them is ongoing.

LONDON, April 10: More than 1.52 million people have been reported to be infected by the novel coronavirus globally and... Read More...

KATHMANDU, July 14: Death toll has reached 48 across the country due to floods and landslides caused by the monsoon... Read More...