Nagdhunga-Naubise tunnel road to be built by 2022 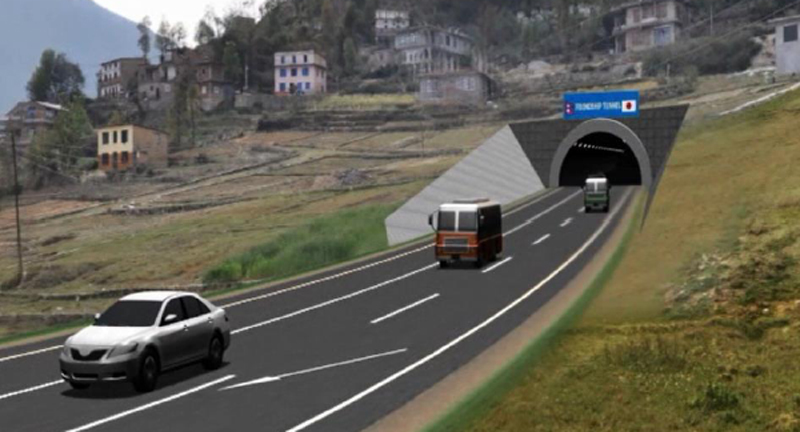 KATMANDU, Dec 21: Travelers, who have been enduring severe traffic congestion while passing through the windy Nagdhunga-Naubise road, are likely to get respite from 2022.

If things go as planned, the Nagdhunga-Naubise tunnel road, which will be built with the financial support of Japan, will be completed by August 2022.

The Japanese government is scheduled to sign a project agreement with the Government of Nepal on Thursday.

The estimated cost of the tunnel project is 22,140 million Japanese Yen (Rs 20.41 billion as per Tuesday's exchange rate). Of the total project cost, 16,636 million Yen (Rs 15.33 billion) will be covered by the Japanese government's official development assistance.

Similarly, construction of toll facility, control office and distribution line of 4.1 kilometers are the other components of the project. Plaza area, rest room, restaurant, shops, parking space will also be developed, utilizing a flat land made by disposal of tunnel excavation materials.

According to sources privy to the project, the Japanese government will provide loans to the government at an annual interest rate of 0.01 percent with a repayment period of 40 years and an additional 10 years of grace period.

The Department of Roads under the Ministry of Physical Infrastructure and Transport is the implementing agency of the project. The construction work is expected to start from early 2019 after hiring a consultant in 2017.

The construction of tunnel road is expected to reduce travel time between Nagdhunga and Naubise significantly, thereby contributing to smooth transportation network between Kathmandu and other major cities of the country Nepal as the Nagdhunga pass connects Kathmandu with major cities like Narayangadh, Pokhara along with the East-West Highway.

While the modality of the operation of the project is yet to be signed, a preparatory survey report of the project prepared in 2015 has suggested a toll rate of Rs 25 for light vehicle and Rs 35 for heavy vehicle for tunnel operation and maintenance.

According to the report, about 90 percent of passenger car users have revealed that they are willing to pay a toll fee to use the tunnel road.