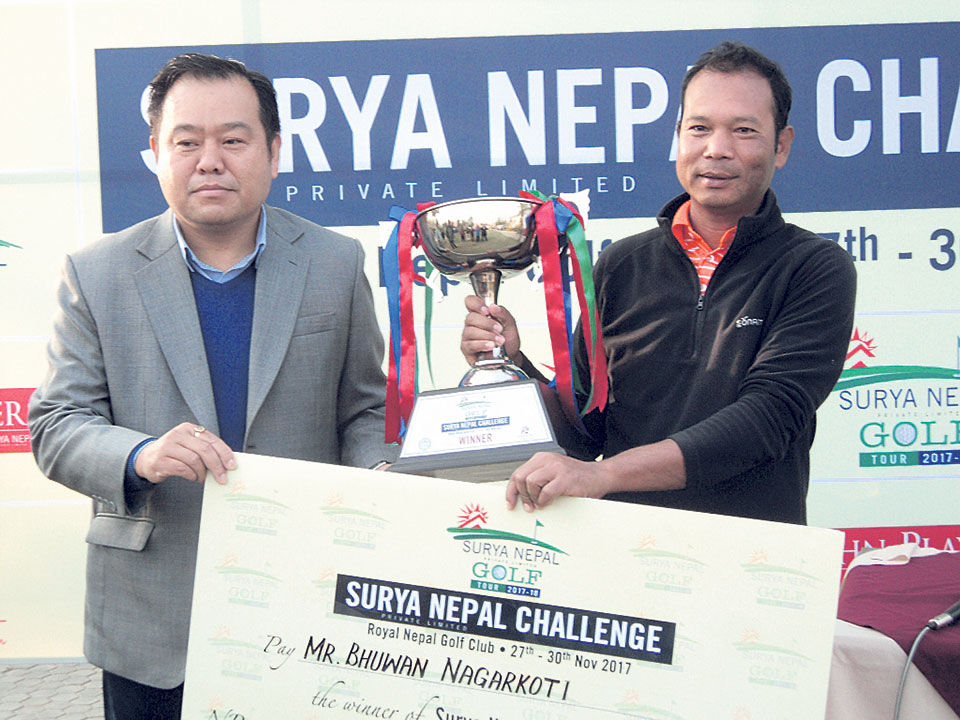 Photo Courtesy: Deepak Acharya Golfer Bhuwan Nagarkoti (right) pose for a photo with the trophy and check after winning the Surya Nepal Challenge at the Royal Nepal Golf Club in Kathmandu on Thursday.

On the final round, Nagarkoti carded one-under 67 for the 54-hole total score of 10-under 194. He remained nine strokes ahead of second-placed Dhana Bahadur Thapa, who scored four-under 64 for the total score of one-under 203.

Champion Nagarkoti bagged a purse of Rs 80,000 while the runner-up Thapa was rewarded with Rs 50,000.

Surya Prasad Sharma (70) and Ramesh Nagarkoti (67) shared the fifth position at one-over 205, while Bhuwan Kumar Rokka (69) is seventh at 206.  Rame Magar and Yelamber Singh Adhikari shared the eighth position at four-over 208, while Jayaram Shrestha came in the 10th place at 211. Nepal number one Shiva Ram Shrestha remained in the 11th position with at 213.

A total of 40 players including 30 professional and 10 amateur golfers took part in the tournament organized by Nepal PGA under the sponsorship of Surya Nepal Private Limited.