Nagarik daily's Paschimeli edition in Pokhara and Butwal from today

POKHARA, July 22: Nepal Republic Media (NRM) has reached another milestone, by bringing out two new editions - Paschimeli Pokhara and Paschimeli Butwal - on Saturday. The editions are targeted at the readers in the country's western region.

Mayor Man Bahadur GC of Pokhara-Lekhnath Metropolis inaugurated the Pokhara edition and expressed confidence that the newspaper would be a medium for timely information for the residents of the country's biggest metropolitan city.

Along with Mayor GC, a pioneer of Nepali media enterprise and the founder of NRM, Hem Raj Gyawali and NRM's Managing Director Binod Raj Gyawali jointly inaugurated the initiative amid a special function organized in Pokhara on Saturday.

Addressing the program, Mayor GC said, “Pokhara-Lekhnath plays an important role in creating the identity of Nepal. Now the Nagarik daily and its editions will also play additional and crucial roles in strengthening the endeavors to develop the region. I feel that the publication of Nagarik Paschimeli from Pokhara will strengthen the national network of information.”

He also expressed hope that Nagarik daily would be able to raise the issues of the people. “May this daily increase its quality and alert the locals and stakeholders to the good and bad activities in the region.”

NRM Director Sambridhi Gyawali said Nagarik and Republica dailies have been publishing its editions from five areas of the country to strengthen connectivity and enhance the common people's access to information.

“Our media is always striving to make the voices of the locals heard at the national level. With this Pokhara edition, we are becoming closer to Pokhara-Lekhnath. Your compassion will inspire us to effectively serve you,” she said. Prior to the new editions, the publishing house has been publishing from Nepalgunj and Biratnagar along with Kathmandu.

NRM is the country's largest media network to be published from five places, Director Gywali said. Paschimeli Pokhara and Paschimeli Butwal would be of four pages. Those editions will hit the newsstands in the two cities from Sunday.

NRM's Corporate Advisor Sohan Shrestha said the new editions will aid to their efforts to make the voices of locals heard in Singha Durbar rather than the other way around. 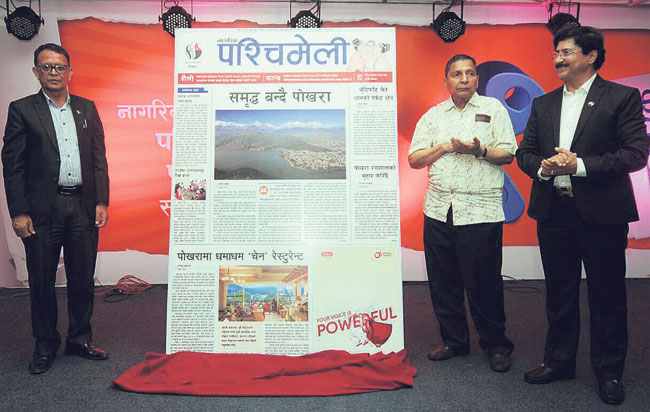 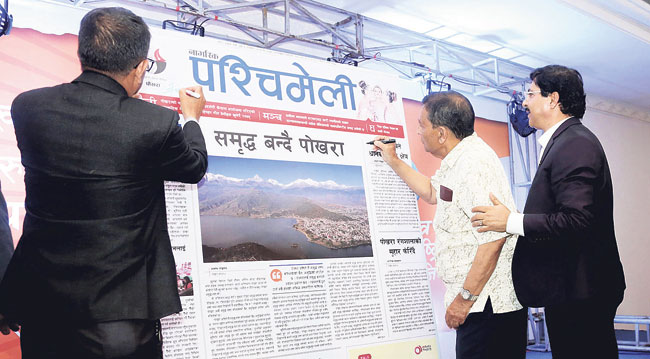