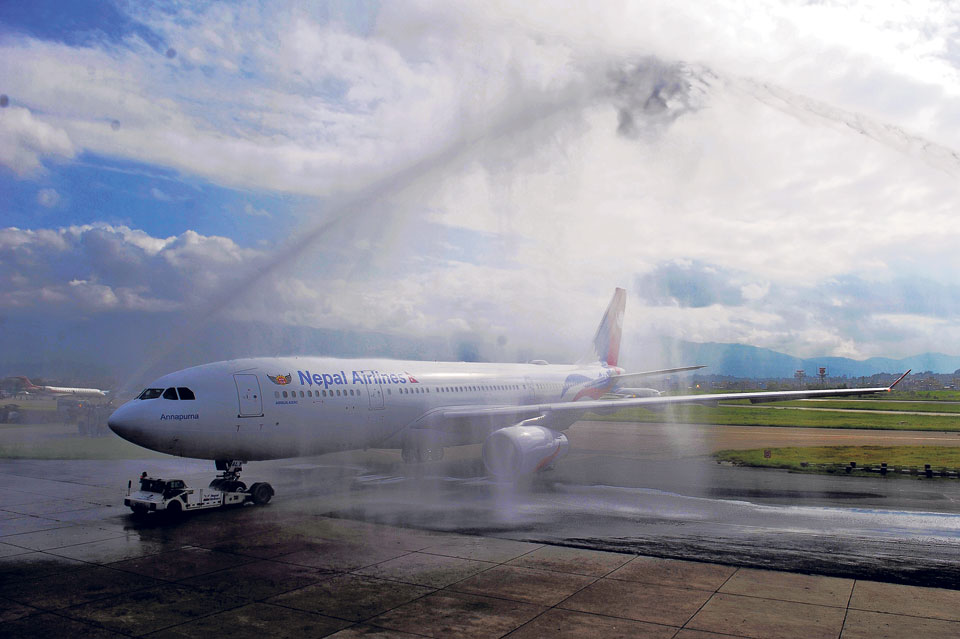 KATHMANDU, Nov 16: After its newly purchased wide-body aircraft incurred losses within one and half months of operation, Nepal Airlines Corporation, the national flag carrier, has turned to the government for financial support.

According to the airline, its new Airbus A330 are causing it to spend more money than the aircraft bring in .

The newly purchased A330 started commercial flights from August 1. As of September 15, they earned Rs 264.8 million for the airline but at the same time some Rs 756.6 million has been spent for maintenance and other purposes. That means the wide body aircraft have meant a loss of Rs 491.8 till the present moment.

Meanwhile, NAC is in debt after purchasing the aircraft for Rs 25 billion. It borrowed Rs 25 billion from the Employees Provident Fund (EPF) and the Citizens Investment Trust (CIT) to finance the purchase of the two planes.

Issuing a white paper Thursday, NAC has now asked for financial support from the government for smooth operations of the newly purchased wide-bodies. Since its new wide-bodies have placed huge financial liability on NAC, it has sought government support for until such time as the aircraft come into full commercial operation .

As stated in its paper, NAC's debt/equity (long term loan/ total capital) ratio is 39.82 along with the total debt of Rs 32.87 billion incurred in aircraft purchase and maintenance. The government has to step in to turn the airline's financial indicators around, the paper adds.

Meanwhile , NAC is unable to operate in full for lack of human resources, it is also mentioned .

The current situation has directly affected NAC's share of the international market. In fiscal year 2017/18 its share of the international market declined by 1.8 percent compared to the previous fiscal year. Its domestic market share increased by 1.3 percent . The national flag carrier operates flights to Delhi, Doha, Dubai, Hong Kong, Kuala Lumpur, Bangkok, Mumbai and Bangalore and domestic flights to 25 districts across the country.

KATHMANDU, Feb 13: Kedar Bahadur Adhikari, secretary at the Ministry of Culture, Tourism and Aviation has assumed the office of... Read More...

KATHMANDU, April 20: The government has decided to stand as a guarantor for the purchase of two wide-body aircraft by... Read More...

Violence against women sees spike in Suklaphanta Municipality
17 hours ago