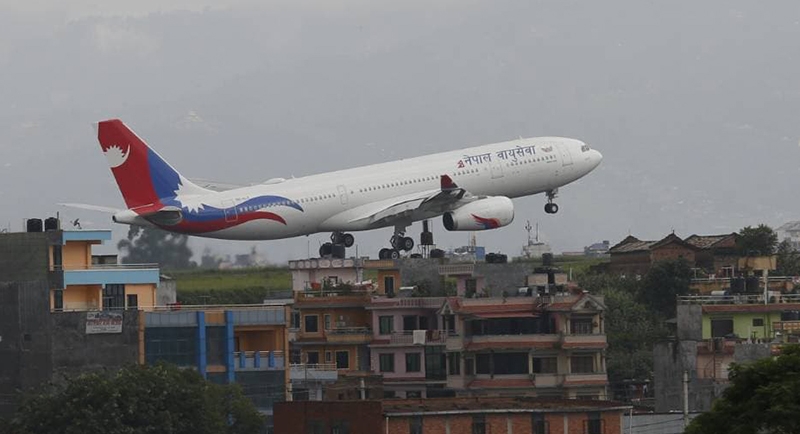 The wide-body jet, which has been given 9N-ALZ call-sign, flew to Kathmandu directly from Toulouse, France. The new aircraft has been named Makalu.

Secretary at the Ministry of Culture, Tourism and Civil Aviation, Krishna Prasad Devkota, and other high-ranking officials of the tourism ministry as well as NAC, among others, welcomed the aircraft amid a colorful ceremony at the airport. The aircraft was given a customary water cannon salute as it was towed toward the hangar of the national flag carrier.

The first of the two wide-body aircraft ordered by NAC landed in Kathmandu on June 28. The second wide-body aircraft has joined the NAC's fleet even though the national flag carrier has not been able to press the first jet into commercial service. The first wide-body jet, which has been named Annapurna, completed its proving flight by operating a flight to New Delhi, India, earlier this week.

Rabindra Shrestha, the spokesperson for the NAC, told Republica that it would take at least three weeks to complete administrative formalities for the aircraft before it can make commercial flights. He also said that the national flag carrier plans to start the commercial flights by September.

NAC bought the two aircraft with an investment of Rs 24 billion from a US-based brokerage firm AAR Corp. Both the aircraft can carry up to 274 passengers, including 16 in business class.

NAC officials say they will use the new aircraft to operate flights to Australia, Japan, South Korea and Gulf countries as well as Europe.