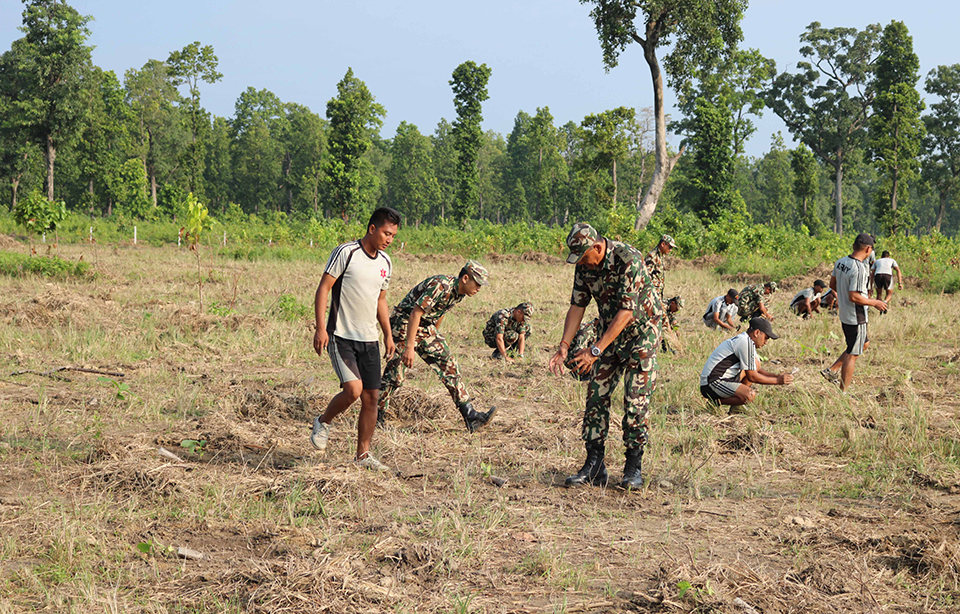 KATHMANDU, Sept 21: Nepal Army, on the occasion of fourth Constitution Day 2019, has launched a comprehensive tree plantation campaign in place of those trees which were chopped down during the construction of Kathmandu-Terai expressway.

According to a press statement released by Nepal Army on Saturday, a total of 5000 young trees were planted in an area of 6.61 hectares of Kolhawi municipality-8, Shanti Tole. Similarly, about 3000 self-grown Sal and other species were also planted and fenced accordingly.

The NA has targeted to plant a total of half a million trees with a ratio of 25 new plants to one cut tree as per an agreement reached between the Department of Forest and Land-Conservation, and the Fast Track Project.

According to NA Headquarters, 17949 trees have been cleared so far and more 2000 trees need to be chopped down in the future during bridge and tunnel construction as part of Kathmandu-Terai expressway, a national pride project of the country.

In a bid to compensating the chopped trees, Nepal Army has already produced 150 thousand young plants of various species at its own nurseries in Nijgadh of Bara and Rajdamar area of Makwanpur.

A joint team of stakeholders have already surveyed and recognized 188 hectares of vacant land at different community and national forests areas of Nijgadh and Kolhawi municipality in Bara to plant the young trees.

KATHMANDU, June 30: As a part of the campaign led by Nepal Government under the concept of ‘One Citizen One... Read More...