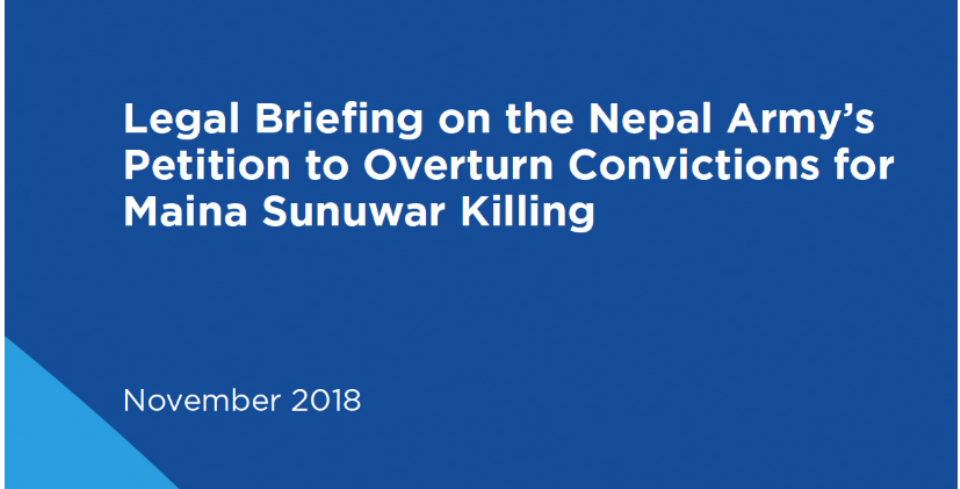 KATHMANDU, Nov 21: The International Commission of Jurists (ICJ) has said that the Nepal Army’s petition before the Supreme Court seeking to overturn convictions of soldiers for the 2004 killing of 14-year-old Maina Sunuwar was riddled with legal flaws.

Releasing its 12-page analysis on Nepal Army’s legal arguments in the petition to upend the convictions issued by the Kavrepalanchowk District Court for the killing of Maina Sunuwar while in Army custody, the ICJ stated that the petition’s success would be a blow to the fight against impunity in Nepal.

“The Nepal Army has sought to overturn the convictions of Maina’s killers by putting forth specious legal arguments that do not hold up under Nepali or international law, or in light of the past decisions of the Supreme Court,” ICJ Asia Pacific Director Frederick Rawski said in the organization’s legal analysis released on Tuesday.

The ICJ’s legal briefing has come at a time when the future of justice for conflict era crimes and human rights violations in Nepal is uncertain even 12 years after the signing of historic Comprehensive Peace Accord between the state and the then rebel Maoists.

“The briefing sets out international law and jurisprudence establishing the Government’s duty to prosecute serious human rights violations as distinct and separate from its obligation to establish the truth, including as part of a transitional justice process,” the IFJ further said.

In September 2017, the Nepal Army had filed a writ petition at the Supreme Court, demanding that the verdict of Kavre District CCourt slapping life terms against three former army officers in the Maina Sunwar murder case be annulled.Captain Saroj Regmi filed the writ petition on behalf of Nepal Army.

The writ petition had named the Office of the Prime Minister and Council of Ministers, the Office of the Attorney General, the Ministry of Peace and Reconstruction, Kavre District Court and the mother of the late Maina among the defendants.

On April 17, 2017, Kavre District Court had convicted  Colonel Boby Khatri and Captains Sunil Prasad Adhikari and Amit Pun  in the  murder of the teenage girl during the Maoist insurgency and slapped life terms on them. The court acquitted Major Niranjan Basnet, who was also accused, stating that the evidence against him was insufficient. Khatri, Adhikari and Pun are no longer in the army.

The writ petition has stated that the three army officers had already undergone the punishment handed down by a military court of inquiry and the district court in pronouncing its own verdict had breached its jurisdiction.

Maina, a 15-year-old school girl in Kharelthok VDC-6 of Kavrepalanchowk district, was arrested by  army personnel on February 17, 2004,  and she disappeared. Following her disappearance, her family and human rights advocates pressured the government over her whereabouts and it later emerged that she had been murdered.

A government attorney filed a murder case on January 31, 2008 at Kavre District Court. The case was filed on the basis of a written complaint lodged by Maina's mother Devi Sunwar on November 13, 2005 against Khatri, Basnet, Adhikari and Pun.

The army later said it had arrested Maina because her mother had helped the Maoist rebels. Though the army initially denied detaining Maina, it later admitted that she had died in captivity.

The army had been claiming that it  formed its own Court of Inquiry on March 14, 2005 to investigate the case. The Court of Inquiry headed by Major General Kiran SJB Rana convicted Khatri, Adhikari and Pun and sentenced each of them to six-month jail terms.

KATHMANDU, March 26: A writ petition has been filed at the Supreme Court today demanding management and control of the... Read More...