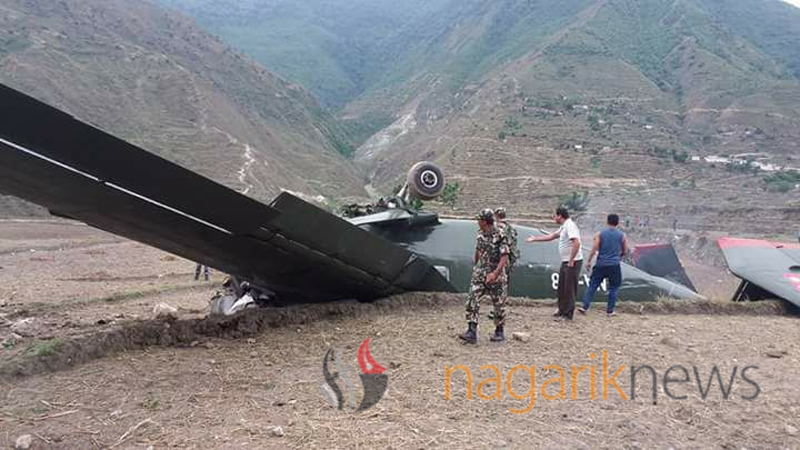 NEPALGUNJ, May 30: Flight commander Kailash Gurung of Nepal Army died in a cargo aircraft accident that crashed near Bajura-based Kolti airport while NA Colonel Gurung was trying to land it.

The accident occurred at 12.06 pm  while NA Colonel Gurung was trying to land the ill-fated NA aircraft with the Call Sign NA48 at the Kolti airport.

"Captain Gurung has died in the crash while other crew members have been rushed to a hospital in Nepalgunj for treatment," said DSP Dal Bahadur Bogati, Bajura District Police Chief, told Republica Online . "His body has also been sent to the hospital."

The injured Magar and Khadka have been taken to Nepalgunj for treatment.

The cargo airplane was supposed to land on the Simikot airport in Humla district. However, bad weather condition forced the pilot to fly toward Bajura as a last resort to avoid possible crash.

Two killed, one injured in knife attack in Bajura

BAJURA, Oct 14: Two youths were killed and another one was injured from a knife attack at Triveni Municiplaity-8 in... Read More...

BANEPA, Feb 4: One person was killed and two others injured in a road accident at Machchhepauwa VDC-3 of Kavrepalanchowk... Read More...

WHO reviewing report urging new guidance over airborne spread of coronavirus
2 hours ago
Govt hands over leaking houses to the poor, many did not take it
3 hours ago

PHOTOS: Children being administered Vitamin A today and tomorrow
21 hours ago