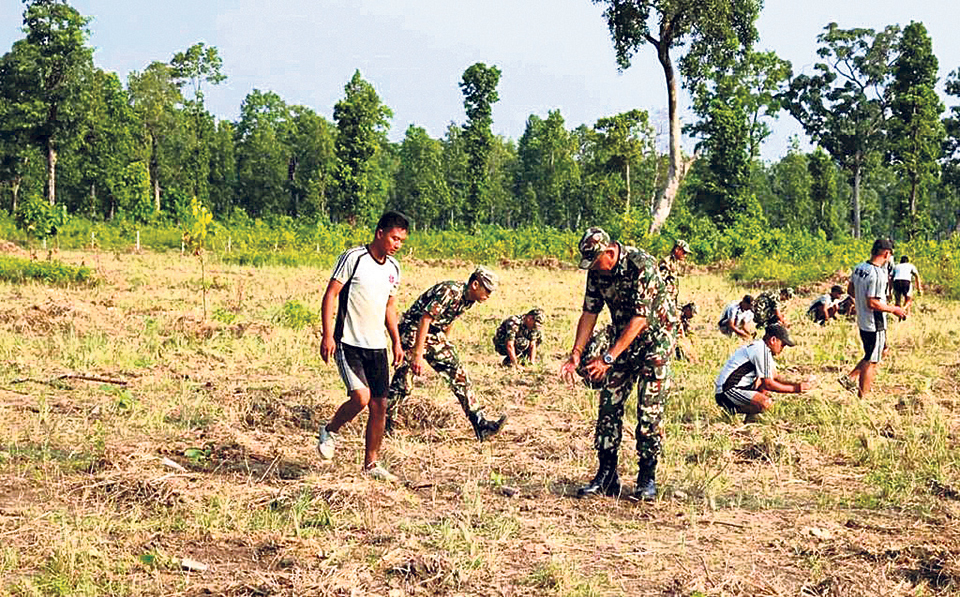 KATHMANDU, Sept 22: Nepal Army has launched a massive tree plantation campaign to compensate the loss of those trees which were chopped down during the construction of the Kathmandu-Tarai Fast Track Project. The campaign was started on the occasion of the Constitution Day.

The NA on Saturday said that a total of 5000 saplings were planted in an area of 6.61 hectares in Kolhawi Municipality-8, Shantitol. Nepal Army also fenced around 3000 self-grown Sal and other local trees.

The NA has set a target to plant a total of half a million trees at a ratio of 25 new plants to one cut tree as per an agreement reached between the Department of Forest and Land-Conservation and the expressway  project.

Of late, 17,949 trees have been cleared so far and 2000 more trees need to be chopped down during the construction of bridges and tunnels under the Kathmandu-Tarai expressway, a national pride project of the country, according to the army headquarters.

In a bid to compensating the chopped trees, Nepal Army has already produced 150,000 saplings of various species at its own nurseries in Nijgadh of Bara and Rajdamar area of Makwanpur.

A monitoring team including army officials and stakeholders have already surveyed and identified 188 hectares of vacant land at different community and national forests areas of Nijgadh and Kolhawi municipalities in Bara to plant trees.

KATHMANDU, March 21: The Nepal Army has expressed concerns on how a handful of media were spreading false news of... Read More...

293 new cases of coronavirus recorded in the past 24 hours: Health Ministry
7 minutes ago

Oli, Dahal agree to meet again for agreement
36 minutes ago