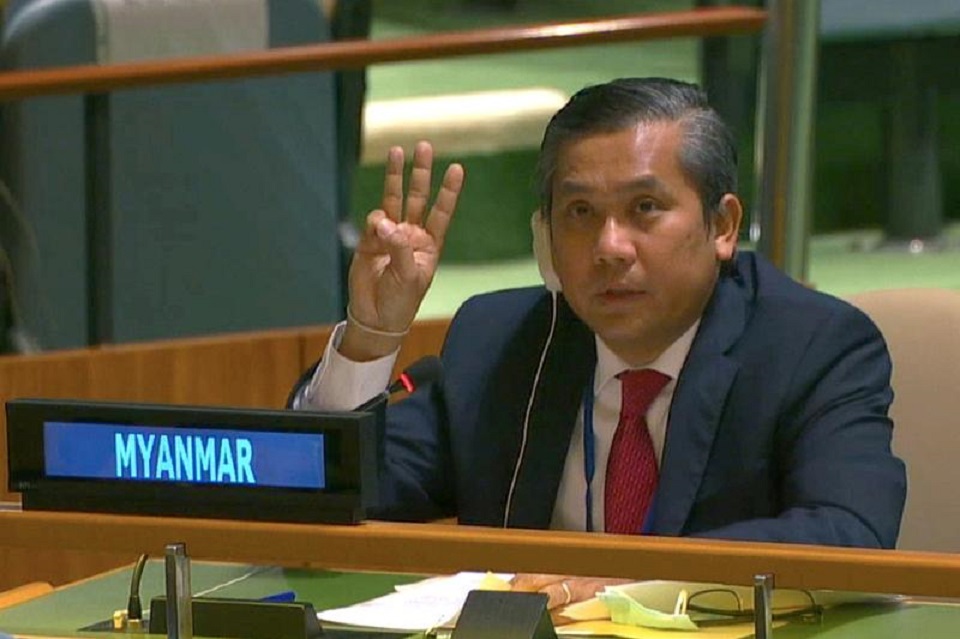 FILE PHOTO: Myanmar's ambassador to the United Nations Kyaw Moe Tun holds up three fingers at the end of his speech to the General Assembly where he pleaded for International action in overturning the military coup in his country as seen in this still image taken from a video, in the Manhattan borough of New York City, New York, U.S., February 26, 2021. United Nations TV/Handout via REUTERS

NEW YORK, Mar 3: Myanmar’s ambassador to the United Nations in New York has formally staked his claim as the country’s legitimate representative while the junta seeks to replace him in a dispute that will likely have to be settled by the world body’s 193 member states.

Myanmar state television announced on Saturday that Kyaw Moe Tun had been fired for betraying the country, a day after he urged countries to use “any means necessary” to reverse a Feb. 1 coup that ousted the nation’s elected leader Aung San Suu Kyi.

“The perpetrators of the unlawful coup against the democratic government of Myanmar have no authority to countermand the legitimate authority of the president of my country,” he wrote.

However, U.N. spokesman Stephane Dujarric said the office of Secretary-General Antonio Guterres was notified on Tuesday that the Myanmar junta had terminated Kyaw Moe Tun and appointed his deputy Tin Maung Naing as the acting U.N. envoy.

“Let’s be honest here we’re in a very unique situation we have not seen in a long time. We are trying to sort through all the legal protocol and other implications,” Dujarric said.

Guterres has pledged to mobilize global pressure “to make sure that this coup fails” and his special envoy on Myanmar, Christine Schraner Burgener, has warned that no country should recognize or legitimize the junta.

The rival claims to represent Myanmar will now likely have to be considered by a nine-member U.N. credentials committee that reports to the General Assembly, which will then make the final decision.

According to the General Assembly rules of procedure, credentials must be issued by either a head of state or government or a foreign minister. The communication sent to Guterres’ office on Tuesday was on Myanmar Foreign Ministry letterhead, but as a note verbale it was unsigned.

Kyaw Moe Tun noted in his letter that President Win Myint and Foreign Minister Aung San Suu Kyi appointed him last year and they remain lawfully elected to their roles.

Dujarric said the United Nations has not received any official notification of any change to Myanmar’s government since the Feb. 1 coup.

Elected lawmakers ousted in the coup have formed a committee and Kyaw Moe Tun told the General Assembly on Friday that is the “legitimate and duly elected government of Myanmar and must be recognized by the international community as such.”

The United Nations has previously had to address competing claims for representation at the world body.

In September 2011, the General Assembly approved a Libyan request to accredit envoys of the country’s interim government. The move came after the United States, Russia, China and European nations had all recognized the new authorities.

As the United States hosts United Nations headquarters in New York City, Kyaw Moe Tun also asked Blinken to “continue to support my work with the immunities customary to this role.”

She commended him “for his courageous and compassionate statement” to the U.N. General Assembly on Friday and “expressed the United States’ support for the people of Burma and the restoration of the democratically-elected government,” the U.S. mission to the United Nations said in a statement.

The 15-member U.N. Security Council is due to discuss Myanmar in a closed meeting later this week, diplomats said. The council has voiced concern over the state of emergency, but stopped short of condemning the coup last month due to opposition by Russia and China.

MYANMAR, March 28: Myanmar security forces killed 114 people, including some children, in a brutal crackdown on pro-democracy protesters on... Read More...

KATHMANDU, Nov 17 : Nepal has abstained from the UN vote on resolution on the situation of human rights in... Read More...