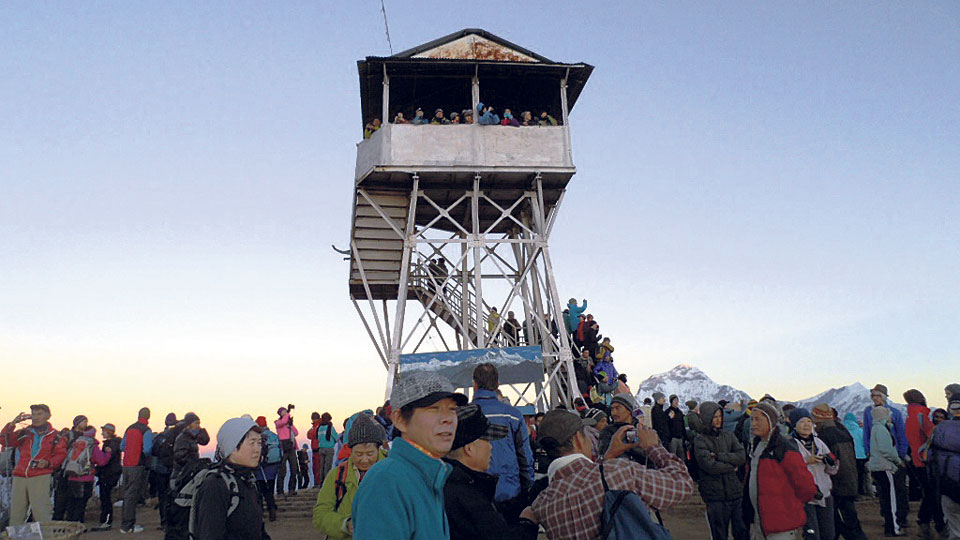 MYAGDI, July 29: Almost 70,000 foreign tourists have visited Myagdi the last fiscal year, which is an increase by 26,000 compared to the previous year.

According to the statistics of district police office and Annapurna Conservation Area Project, a total of 69,816 tourists have visited Annapurna circuit foot trail, Round Dhaulagiri and other tourist destinations of the district in the fiscal year 2016/17.

Dam Bahadur Pun, chief of Annapurna rural municipality, said the rise in tourist arrival can be attributed to the recent listing of tourist attractions of Nepal by Lonely Planet, a world-renowned tourist magazine, that had included Ghorepani and Pun Hill among the 10 best destinations.

In the previous fiscal year of 2015/16, 43,632 tourists had visited Myagdi. Statistics showed that among the tourists coming to Myagdi, at least 60 to 70 percent visited Annapurna rural municipality.

Most of the tourists come in groups or as couples. However, the number of male tourists is higher because of single travelers from European countries.

October and November were the peak months, with tourists 10,937 entering the district. On the other hand, the least number of tourists (2,506) arrived in the months of June and July.

According to data, most tourists came to visit Ghorepani. Dhaulagiri Mountain climbing has stood as the second attraction for tourists.  Amar Baniya, president of Dhaulagiri Tourism Council said that mostly the tourists leave for their destinations without reaching the point from where data is collected. So, he estimated, the data may not have included at least five thousand tourists.

He said that tourists have been facing problems of poor infrastructure even in the most attractive destinations of the district. He urged the authorities to allocate sufficient budget for the development of tourist spots of Beni municipality and five rural municipalities of the district.

Tourism entrepreneur Baburam Acharya said that infrastructure development was essential as the number of foreign tourists has been increasing gradually.

Acharya pointed out that short-distance destinations should be developed for tourists who stay for a single day inside the district. Since the road connection has been displacing the foot trail, the stay of tourists has been reduced. He said that if the situation could be improved, over 100,000 tourists could come to the district.

Tourists from China, Belgium, Italy, Germany, Israel, Korea, France, USA, UK, and SAARC countries are the major visitors to Myagdi. Panoramic mountain range, Magar culture, different species of birds and plants, and the spectacular view of sunrise are some of the major attraction for tourists.

BABIYACHAUR (Myagdi), July 22: Some 16 suspension bridges have been constructed in mountainous district, Myagdi, this year at the total... Read More...