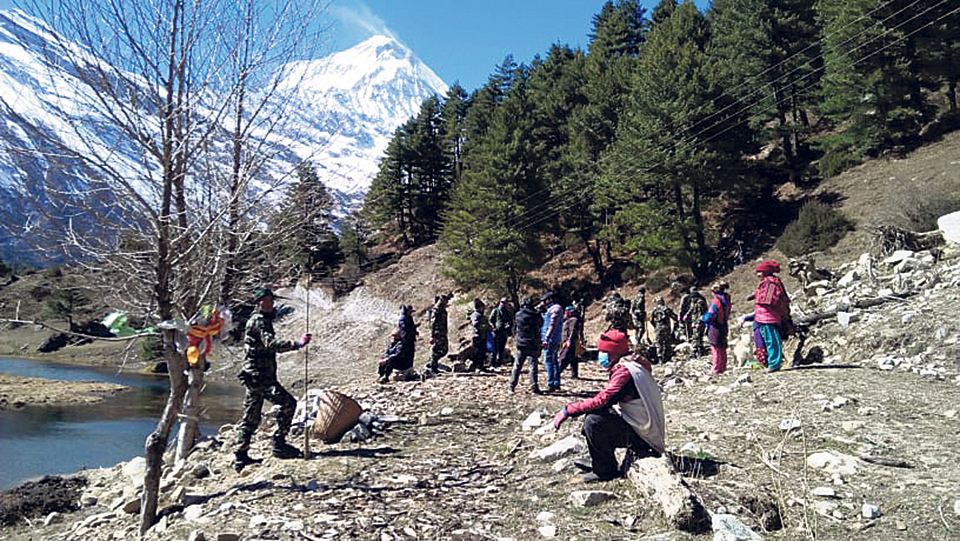 Activists cleaning up the Titi Lake in Mustang in this recent photo. Photo: Sushil Babu Thakali/Republica

MUSTANG, March 7: The Titi Lake in Mustang looks mesmerizing these days. Otherwise not so clean, this lake has received this new look after a massive cleanliness drive jointly launched by Nepal Army, locals and other stakeholders for the past few years. Annapurna Conservation Area Project (ACAP) took the initiative for the change.

The lake situated at an altitude of 2,679 meters on the eastern side of the Beni–Jomsom road is around five kilometers from the Kaligandaki River. While it is around an hour walk from the road, one can reach here with just after a few minutes drive. Although the road is quite rough, it attracts visitors though not in a very high number.

Titi Lake is just one among around half a dozen lakes at Thasing and Gharapjhong Rural Municipalities and Mustang. Concerned over its gradually deteriorating quality, ACAP planned to clean it up a few years ago. Now after the work is almost complete and the lake looks clean and serene, locals have expected a huge surge in the number of tourists. Another major lake in Mustang, which locals have been urging for promotion, is the Dhumba Lake. Just like Titi Lake, Dhumba Lake has also been attracting 'fewer tourists than it deserves', according to locals.

Four months ago, ACAP initiated cleaning Sekung Lake of Thasang Rural Municipality. According to Tulasi Dahal, a conservation officer associated with ACAP, all the lakes of Mustang are being cleaned up. "And that is very important from the environmental plus tourism points of view. The lakes are being cleaned one after the other. Somewhere works are going simultaneously," he said.

Dahal stated that the cleaning of the lakes has remarkably benefited wildlife as well. A huge number of ducks and other types of birds are seen in increased numbers in the lakes. And crowds have gathered in the same additional number to see those precious creatures. "The birds have added to the beauty of the lakes. More and more people are visiting the lakes as they are getting cleaner. We can expect that this will help the tourism sector thrive in here," he said.

Mustang is one of the major places in the country for migratory birds. Birds come and stay here from as far as Siberia and other parts of the world. The degrading environment has however gradually affected the movement of the birds, according to reports.

According to Binod Pariyar, secretary of a member of a local forest community, the cleanliness drive is an ongoing process. This is about awareness, he said. "The lakes look clean now as we worked on them. But we cannot stop it by saying that the work is over. Plastic ban in the region and other projects will go on for long," he said.

Pariyar added that locals themselves have pressured each other for garbage management. Basically, plastic related wastage is being monitored and taken care of. "Until and unless public itself is eager to save the environment, nothing can help," he added.

GALESHWAR, Sept 11: Vehicular movement along the Beni-Jomsom road section has come to a standstill for the past four days. Read More...

Mustang villages cutoff in lack of bridge over Kaligandaki

MUSTANG, May 4: Lack of a bridge over the Kaligandaki River has made life difficult for the residents of several... Read More...

MUSTANG, Sept 9: Over 10 million rupees have been collected in a religious and educational fair organized in Janahit Multiple... Read More...