Mustang people on the verge of leaving ancestral land; lack of irrigation facility 'leaves no other choice' 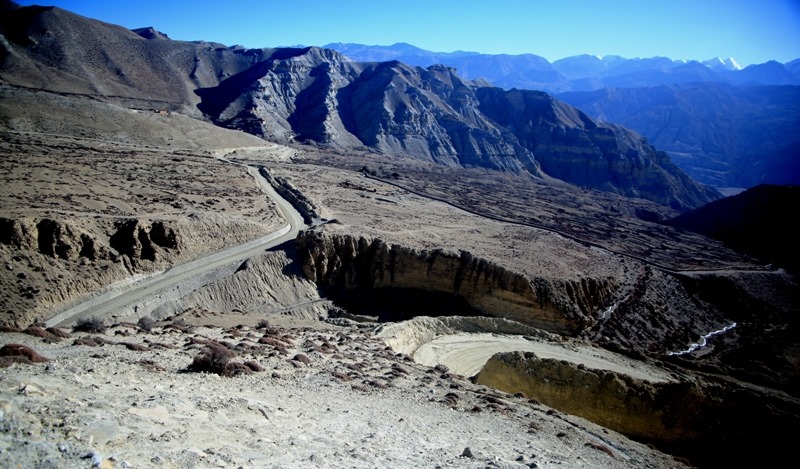 The dry terrains of Lo Ghekar village in Mustang

POKHARA, Dec 13: It’s sad but true. People in some villages in Mustang have reached the decision to leave their ancestral land out of no choice. The terrains where they could easily grow valuable crops, fruits and vegetables have gone barren due to the lack of irrigation facilities. The locals of Lo Manthang, Dhakmar, Lo Ghekar and so on have expressed grief over the “apathy shown by the government”.

"Our soil is suitable for potatoes, green leaves, barley and apples. But our lands are barren," said Dhawa Gurung, chairperson of Lo Ghekar Damodarkunda Rural Municipality - 3. "We are tired of asking for irrigation facilities. Now we want to be relocated, though leaving the land of our ancestors is very painful," he added.

According to Gurung, there are 68 households in his ward. All of them are now waiting for the government to relocate them. "The choice is not relocation, but irrigation facility. But since we have realized that our problem is not going to be addressed, we have now started seeking recommendation for relocation," he said, adding that some other remote villages are facing the same fate.

The government has embraced the slogan of ‘Happy Nepali, Prosperous Nepal’. But the locals of Mustang villages are far from it. They are familiar only with the utter apathy shown by the establishment, Gurung further remarked. "Our life is already hard here due to extreme cold. Let alone other comforts, the government doesn't care for even the minimum facility," he said. "We have talked both with the provincial government and the federal government, things have hardly turned positive."

Gandaki Province had granted some amount to the villages to ensure irrigation. But that was too little to fix the problem, according to Gurung. Unless a reliable irrigation system is introduced, locals cannot manage their livelihood in the dry land, he urged.

Meanwhile, Provincial Minister for Physical Infrastructure, Ram Sharan Basnet expressed concern. He stated that it is sad to see people being forced to leave their land as they don’t have any other choice. "We are concerned. We will do something. It's not a hollow promise, "he said.

MUSTANG, Feb 23: With the objective of attracting adventure sports lovers from around the world, Himalyan Ski Trek is starting skiing... Read More...