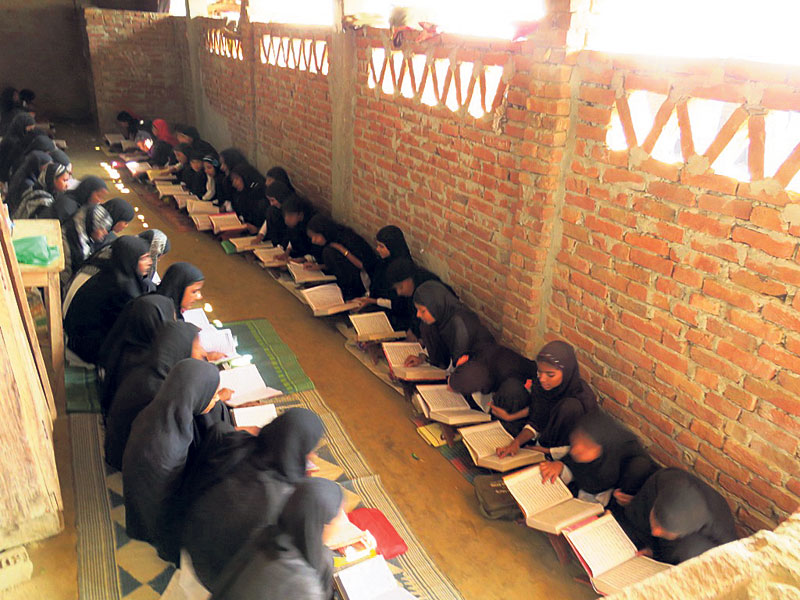 Around 400 Muslim girls study at this privately funded school of whom 150 are boarders. (Madan Thokar/ Republica)

RAUTAHAT, Nov 10: Muhammad Makshul Aalam was always strict about disciplining daughters. He was not much interested in sending them to school either. It was only Madrasa (special school for Muslim children) Aalam would willingly send his daughters to.

But that was five years ago. In the recent years, he has not only sent daughters to school but has been also anxiously planning for their higher education.

“I used to think that we should always keep control over our daughters. In Muslim society, there are certain norms and values that girls and boys have to follow. We used to send our kids only to Madrasa for formal education, sometimes not even there,” said Aalam. “However, gradually I realized that our children would be left behind if we continue depriving them of modern education. Now I have a dream to see not only my kids but all the children of Muslim community highly educated.”

In his leadership the Muslim community of Farhadwa VDC of Rautahat opened a school for girls five years ago. This worked as a milestone for girls' education in Rautahat. Many Muslim families started sending daughters to this school. “However, we are still not fully successful. Girls are still seen in burka and some still stay at home,” he lamented.  “We are noticing subtle changes over the time. Change does not come in a day but it certainly comes when efforts are made,” he stated.

Regarding boys, Muslims were however ambitious since long time back. According to Aalam, earlier they thought that it was important to send boys to send to good schools but deprived girls of the same. “When it came to sons, we were ready to spend a lot to send them to boarding schools,”

Founding of the Jamiya Khadijatul Kubra School became possible because of collective efforts and donations from the community. “That was when few were aware of the importance of education. Now, things are much better,” Aalam said.

The school is not any less modern in its operation than any other private schools in Rautahat. This is the reason why the school has attracted children from beyond the district. Muslim girls from Bara, Parsa, Mahottari and Sarlahi and also from the Indian border sides come to the school. Girls from Indian villages - Haka, Motihari and Sitamadi, among others study at this school. School's Principal Kari Sahabudhin informed that the school has 150 residential students. And the remaining 250 girls come from home. The school provides tuition for free.

I realized that our children would be left behind if we continue depriving them of modern education. Now I have a dream to see not only my kids but all the children of Muslim community highly educated.

Guardian of a student at the school

“We have students from Bara, Parasa and Rautahat and some even from bordering towns of India. It is an ideal school for girls,” he said.
The school does not compromise when it comes to hiring qualified subject teachers, Sahabudhin said informing that the school has excellent professional Science, Maths and English teachers, among other subjects. “We do have good teacher for Urdu as well. In fact, Urdu is regarded as a high priority medium for education normally. But we give equal importance to English, Science and Maths. We believe in holistic education,” he said.

The school has not received support from District Education Office or the government. It is solely dependent on fund raised from the community. “We are greatly supported by our community members, most of whom are migrant workers. They donate to the school almost regularly,” Sahabudhin said. He added that the school could still improve if the government also extended its support.

Facilities, safety and security of girls are the first thing the school ensures and that is the reason why it is in priority of Muslim families, he claimed. “They come and visit here. After they find it suitable for girls, they are relieved and send their daughters. We make every effort to make the school girls-friendly,” he said.

A local Muslim leader Shekh Wakil seconded his statement. Wakil stated that Muslims would not be ready to send their daughters to the school if they felt any kind of vulnerability. “But the school does not allow outsiders in easily. It ensures full safety and security of girl. The environment is good,” he said.

The dotted Muslim daughters that are empowering women

NEPALGUNJ, March 8: When a daughter was born to a Muslim family in Eklaaini town of the district, Amanat Alisa, the... Read More...