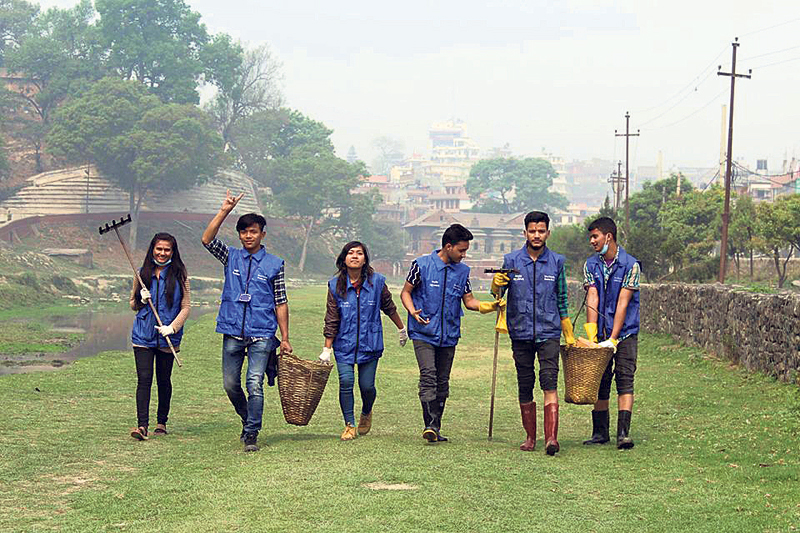 KATHMANDU, July 22: Global Peace Young Leaders (GPYL) was formed in 2014 as a sister organization of Global Peace Foundation (GPF). Ever since its establishment, it has launched initiatives that not only benefit the society but the participants of the program as well.

One of the many initiatives taken by the GPYL is its project ‘Muskaan’. GPYL launched the project from Parsa in late May of this year. In its initial two days program, sixty students from Shree Saraswati Lower Secondary School were given leadership training and were trained to properly brush their teeth. Now the project has also started an exchange program between schools. Students from a well facilitated school will be taken to a comparatively underprivileged school so that each student gets to learn about their respective education opportunities.

The project is now being led by the Junior GPYL, a group of young teens, most of them still attending high schools. Suraj Raj Pandey, president of GPYL says, “I have high hopes with the junior wing. We are small, we are young. We can’t change the world but we can at least lend a hand.”

The Junior GPYL has been keeping Muskan alive. The young volunteers venture out to different schools in the valley, providing students leadership programs.

However, the GPYL’s involvement isn’t restricted only to Muskan. There are several of its other wings like the Global Peace Platform (GPP) and the newly launched GPYL Sports among others. These wings are always active, reaching out to all the parts possible under the banner of GPYL.

Similarly, the GPP conducts activities every weekend at the GPYL office in Kamaladi. GPP has been given the responsibility of organizing events, reaching out to people, and conducting student engagement activities. So every weekend, you can see young people listening to guest speakers, debating on issues or just spending a casual time singing or quietly enjoying a movie screening session. In a nutshell, GPP invites any youngster to take initiative that might spark positivity in society.

Suraj Raj Pandey, the president of GPYL says, “GPYL is something inexplicable for me; maybe the best thing that happened in my life. It’s not just an organization but a family. Anyone close to this organization becomes a member of this large family.”

He further adds, “GPYL has also helped me in furnishing myself as a leader, a positive person and helped me see things from a better perspective.”’
Yutshuv Bhattarai, program director, says, “GPYL is a dream which we have seen. And we hope to fulfill it.”

GPYL now aims in expanding it to other parts of nation, and across the borders. It also has initiated project ‘Mann’ that helps share stories of sadness and happiness, poetry and stories through music.

KALIKOT, Feb 28: At least 12 students were injured in a clash between various student unions in Kalikot district on... Read More...

Gold price rises by Rs 200 per tola
11 minutes ago

Far West of Nepal  at high seismic risk
11 minutes ago