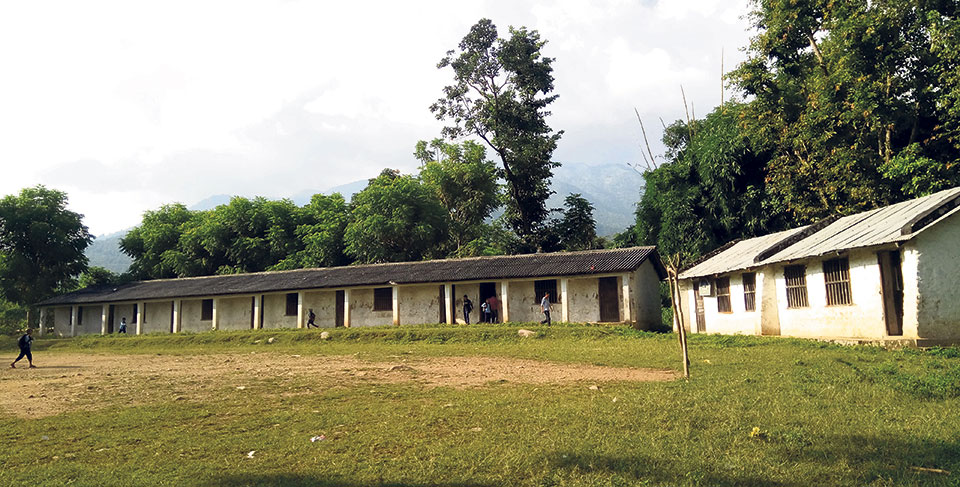 The building of Nepal Rastriya Saraswati Primary School where only around 10 students regularly come to school. | Photos: Republica

SURKHET, Sept 22: Nepal Rastriya Saraswati Primary School was one of the most popular schools in the district until a decade ago. The craze was so high that not only commoners but even very rich and influential families used to feel lucky to get their children admitted here. Now, the situation is totally different. There are not even a dozen of regular students and teachers in the school now. The morning assembly and prayers, which used to be held on a daily basis, have now become a matter of the past. Not even a single student can sing the national anthem. The school is not a school anymore, locals say.

This session, 24 students got enrolled here. Among them, only 10 attend classes regularly. In the coming year, the number may fall further, according to the teachers. No wonder, the school is on the verge of closure. Interestingly, it has a great set of infrastructures. A big playground, big-size classrooms, library, laboratory and enough number of rest rooms, among others are the features of the school.

With the number of students declining, only five teachers are currently working here. According to them, the school lost its students to private schools.

“This was one of the top schools in the district until a decade ago. Until before the peace process begun, it was in its height. But after the war ended and the peace process kicked off, the effect was seen here too,” states the principal, Sita Kumari Ghale. “The crowd then was very big. The school had a great name. But now things are not the same,” she added.

According to Ghale, the opening of private schools turned costly to this community school. Even ‘poor’ parents opted to admit their kids at private institutions.

“Even though we were providing facilities, they took the students away. The mindset that private schools are better than community schools played the major role in destroying our reputation,” she lamented.

After the peace process, private institutions mushroomed in towns and villages. This gradually shrunk the number of students in community schools. The community schools’ failure to remain on par with the private ones is also another reason for their downfall.

The teachers admit that the school also failed to upgrade itself according to the needs of the time. Despite having fairly well infrastructure, the management committee could not do a good job, they say.

“It is true that we lost our children to private schools. They all joined private ones while our students’ number is just two dozen now. And among them, only a handful of them come to school regularly,” lamented a teacher Tekraj Budha. “The poor management has put the school’s future at risk,” he added.

The school’s management committee has not reshuffled its members for a long time. In fact, the committee members hardly appear in school or ever hold a meeting. According to the teachers, the negligence has hit the school’s general activities.

“Nobody comes here for monitoring. Neither the board members nor the authorities from the district education office visit us,” said a teacher requesting anonymity. “This school could run very well if it had received due attention. But nobody cares,” he added.

According to Budha, the lack of interest of stakeholders has ruined the future of the school. Community schools are for commoners, so this should have received better attention, he argued.

“At private schools, they have to pay hefty fees. Community schools offer education at minimum fees. So, this should have received the better attention of the parents and the authorities,” Budha said. “But even such a glorious school is going through such a bad time,” he added.

According to Budha, there are many other schools in the district and beyond which have failed to attract children despite having all the required infrastructures. A little effort could have changed this scenario, he notes.

“Not just the schools without classrooms and playgrounds but even the schools with all necessary resources and infrastructures are losing students to the private schools,” said Budha. “If community schools are not given attention, the country can never prosper. But for this, all stakeholders must be equally serious,” he added. In the lack of monitoring, teachers have been sending their own family members to take classes. Budha admitted this has been happening in his school too.

Even though the government spends millions of rupees for education every year, a huge number of children are still out of schools. Similarly, reports say the school dropout rate, basically among the marginalized communities is still high. The failure of the government to ensure the quality of community schools has forced even parents with merger earning to send their kids to private institutions 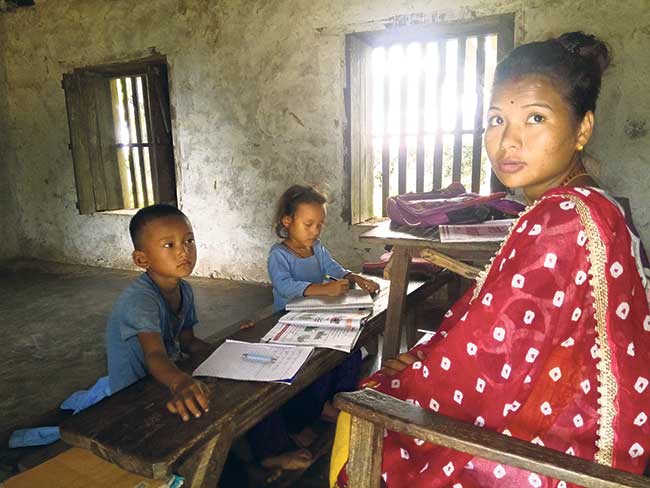 Bhishma Raj Pun teaching at grade two. His father Suryalal Pun is the teacher recruited by the school. In the lack of monitoring, teachers send their own family members to take classes.

KATHMANDU, Oct 5: Bijaya Dashami, the 10th day of the Bada Dashain festival, is being celebrated across the country with... Read More...