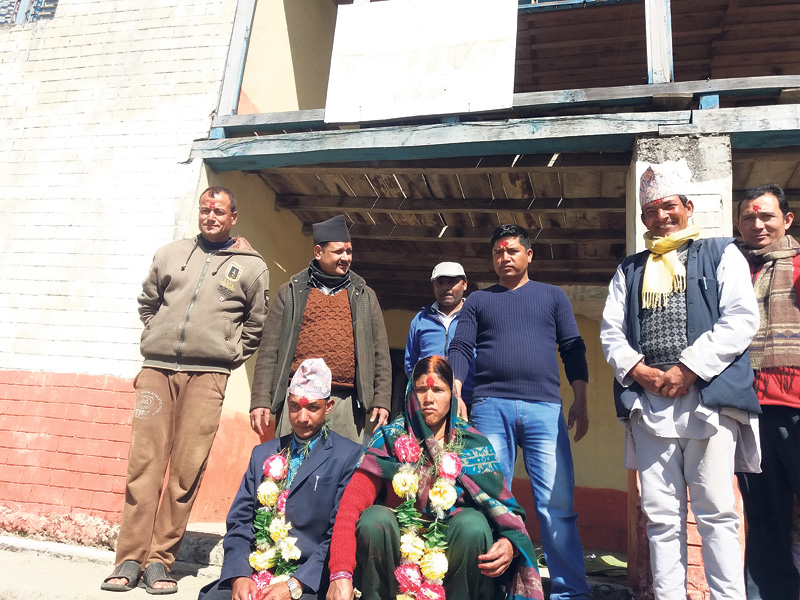 KALIKOT, Feb 24: Dilli Koirala and Mimkosha Bista on Thursday tied the nuptial knot in Kalikot District Jail, where the two are serving prison terms for separate murders. Koirala, who is in jail for killing his wife and Bista, who is serving time for killing her husband, had developed an intimacy within the jail over the last few years.

Koirala's mother, who is also in the same jail for her role in the murder of her daughter-in-law, had asked for Bista's hand for her son.

“He murdered his wife and I did in my husband. His mother likes me and that is one of the reasons I drew close to him,” said newlywed Bista, 30. Koirala, 33, a resident of Rachuli-VDC of Kalikot, added that he was  lucky to get Bista for a wife and it became possible due to his mother. “It is our destiny perhaps. Once we are out of jail and go home, we will have even greater mutual understanding and love. Since we both happen to have committed the same kind of crime, we won't be in any position to look down upon one another,” he said confidently.

Koirala added that their wedding would be an example that no matter what one's past, one should get an opportunity to improve and live a better life.

According to jailer Sanjay Mahato, the bride and groom cannot enjoy their conjugal life in jail. “They are serving jail terms. One  of them has to wait three more years and the other one more year to get out of here,” he informed.

Males and females are not allowed live together in jail. So, even after their marriage, the newly-wed couple will be living  in prison separately as before.

Koirala has two sons from his previous wife, and Bista has a son and three daughters from her previous husband. Her youngest daughter, who is just five, is in the jail with her.

Jay Bahadur Adhikari, the priest, solemnized the wedding, which was attended by media persons, human rights activists and jail staff. Everyone including jailer Mahato offered the couple best wishes for a happy future.

KHOTANG, July 8: A prisoner has been found dead on Sunday evening in the toilet of Khotang District Prison. ... Read More...