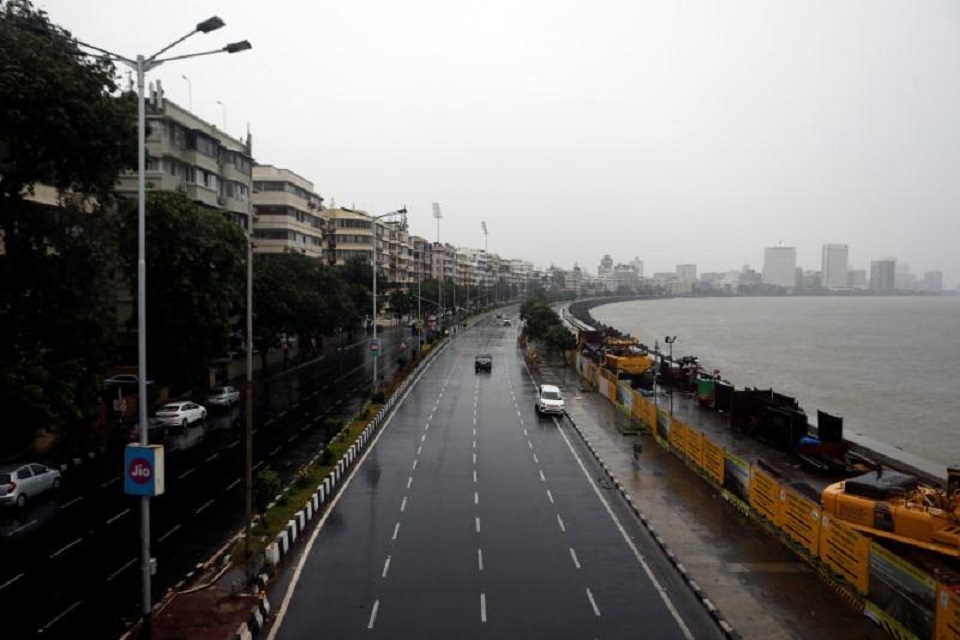 A deserted road is seen at Marine Drive before cyclone Nisarga makes its landfall, in Mumbai, India, June 3, 2020. REUTERS/Francis Mascarenhas

MUMBAI, June 3: Bracing for the first ever cyclone to hit Mumbai in living memory, people in India’s most populous metropolis stayed off the streets and scrambled to protect their homes before the torrential rains and gale-force winds struck.

Authorities were working until late in the night on Tuesday to move thousands of people away from the coast, amid fears that a city already ravaged by COVID-19 infections could see its healthcare system further overwhelmed.

“We have seen rains, but we have never seen a cyclone in the city. We don’t know what damage it will do,” Shantaram Terekar, who lives in a one-room hutment in the city told Reuters.

Terekar said he had switched off electricity and put some tarpaulin to secure his thin metal roof.

India’s largest container port, Jawaharlal Nehru Port Trust (JNPT), on the outskirts of Mumbai, said it had shut for 24 hours, and only 19 flights were due to operate from Mumbai’s airport.

The cyclonic storm in the Arabian Sea was “very likely to intensify into a Severe Cyclonic Storm” later on Wednesday, the India Meteorological Department (IMD) said, predicting winds gusting up to 120 km per hour (75 miles per hour).

The cyclone, called Nisarga, could make landfall on the coastal border of Maharashtra and Gujarat states, where officials have evacuated more than 100,000 people.

Cyclones often skirt Mumbai, a metropolis of more than 20 million people, though every year during the June-September monsoon season torrential rains flood roads, and bring a halt to a suburban railway service that serves millions of people.

Mumbai emergency services are already struggling with the nation’s largest outbreak of the novel coronaries. The city and its surrounding areas have so far reported some 55,000 COVID-19 cases and more than 1,700 deaths from the disease.

In Mumbai, authorities shifted 150 Covid-19 patients to other hospitals as the newly built makeshift hospital they were being treated in was located in low-lying area.

KATHMANDU, Jan 2: Lwang Lama aka Bhote Lama, who had sold two workers of a carpet factory in a brothel... Read More...