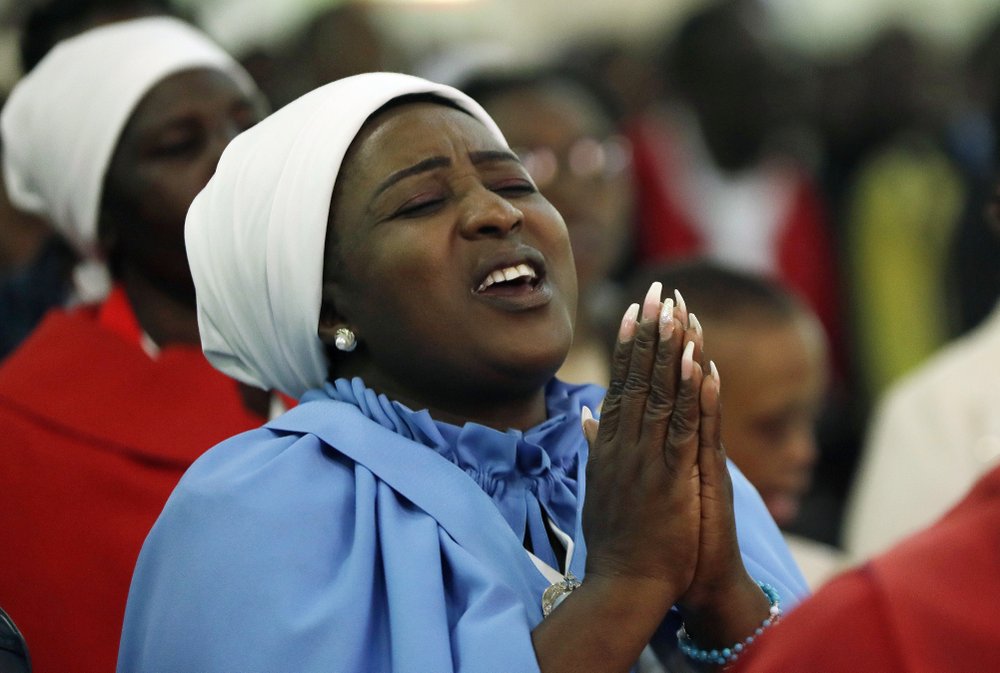 A church member prays during the Sunday mass at the Roman Catholic Church in Harare, Zimbabwe, Sunday, Sept. 8, 2019, a church that Robert Mugabe regularly attended. Days of official mourning have begun in Zimbabwe for Robert Mugabe, who had become a national hero despite decades of rule that left the country struggling. Mugabe, an ex-guerrilla chief who took power in 1980 when Zimbabwe shook off white minority rule and presided for decades while economic turmoil and human rights violations eroded its early promise, died Friday at a hospital in Singapore. (AP Photo/Themba Hadebe)

Mugabe, an ex-guerrilla leader who became the southern African country’s first leader following independence from white minority rule in 1980 and held on to power until he was forced to resign in 2017, died in Singapore on Friday.

His body will arrive in Zimbabwe on Wednesday, the Sunday Mail quoted presidential spokesman George Charamba as saying.

Mugabe enjoyed strong backing from Zimbabwe’s people after taking over in 1980 but that support waned following decades of repression, economic mismanagement and allegations of election-rigging.

He is still regarded by many as a national hero, though, with some even beginning to say they missed him after his successor, Emmerson Mnangagwa, a former ally turned foe, failed to revive the economy and used the army to crush dissent.

According to Charamba, Mnangagwa and family members will receive the body at the airport named after the former president in the capital, Harare. The body will be taken to his rural home, about 85 kilometers (53 miles) southwest of Harare before being placed in a giant stadium for public viewing.

Mnangagwa, who described Mugabe as a “a great teacher and mentor”, declared him a national hero, the highest posthumous award in the country and said official mourning will only end after the burial at the National Heroes Acre, a hilltop shrine reserved exclusively for Zimbabweans who made huge sacrifices during the war against white-minority rule.

In death, Mugabe received praise from his former political and military allies, who propped up his rule for close to four decades before forcing him out in 2017.

“He died a very bitter man,” family spokesman and nephew to Mugabe, Leo Mugabe told reporters at the family’s rural home Saturday. “Imagine the people that are guarding you, that you trusted the most, turn against you.

At a Roman Catholic cathedral where Mugabe used to attend Mass, a priest on Sunday opened the church service by paying tribute to the former ruler and asking congregants to forgive him.

“He did a lot of positive things for our country but not everything that he did was right. We should learn to forgive for all the wrongs he may have committed. May God grant him mercy,” said Father Richard Mushuku.

“Being a Catholic, he tried his level best to live according to Christian values and I know people have mixed feelings in the way he practiced his Christian values,” Kennedy Muguti, the vicar-general of the archdiocese of Harare, told The Associated Press after the Mass.

Alex Ngwena, a parishioner, said “current leaders must learn from his mistakes.”