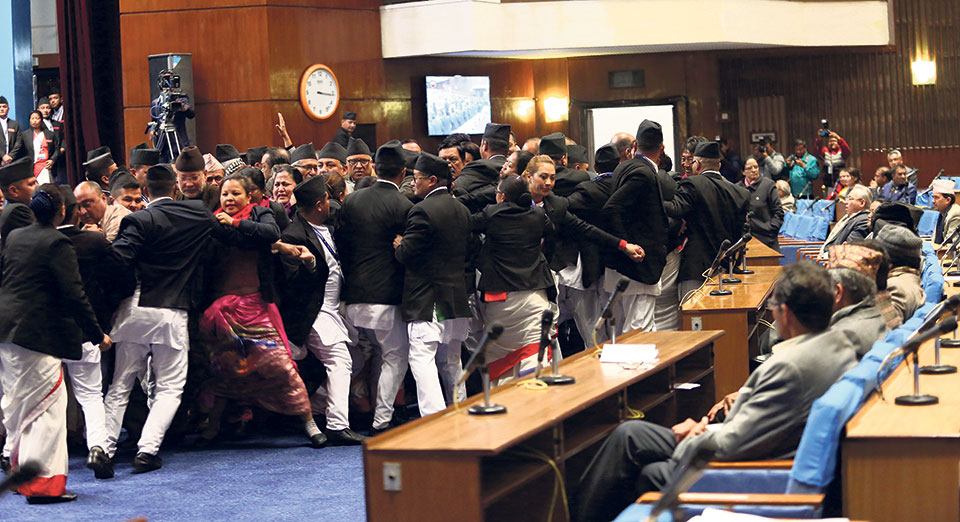 Nepali Congress lawmakers in push and shove with marshals in parliament on Tuesday to prevent the education minister from tabling the Medical Education Bill. Following the disturbance, the parliament meeting has been postponed to Friday. Photo: Dipesh Shrestha/Republica

KATHMANDU, Jan 23: Ruling Nepal Communist Party (NCP) and main opposition Nepali Congress (NC) have resorted to a scuffle in parliament on Tuesday after the government pushed the National Medical Education Bill forward for endorsement amid obstruction from the NC.

With the main opposition’s strong protest, the government’s plan to endorse the controversial bill immediately has been foiled at least for some days. Dr Govinda KC, who has been undergoing his 16th fast-unto-death, has been protesting against the bill for not incorporating the agreements reached between the government and himself in the past.

Lawmakers from both ruling and opposition benches resorted to shoving each other as the ruling party lawmakers tried to escort Minister for Education, Science and Technology Giriraj Mani Pokharel to the rostrum for tabling the disputed bill while opposition lawmakers trooped into the well to obstruct proceedings until their issues were addressed. Speaker Krishna Bahadur Mahara had to adjourn the meeting for 15 minutes as marshals failed to control the two sides. Eventually, the speaker deferred the meeting for Friday through a notice, without convening the next sitting.

No sooner had the speaker announced the commencement of the meeting than NC lawmakers rose from their seats and announced that they wouldn’t allow House proceedings until the government decides to give continuity to two hospitals named after two former NC presidents.

The NC had obstructed the parliament meeting on Monday also, accusing the government of trying to dissolve two hospitals named after Nepali Congress leaders Girija Prasad Koirala and Sushil Koirala by not endorsing the proposal for their continuation through the cabinet. The hospitals are in the process of being established in Tanahun and Banke, respectively,

“The government made an unjust decision by not giving continuity to the two hospitals named after NC’s leaders who have contributed a lot for the establishment and institutionalization of democracy, peace and the constitution in the country,” said NC leader Prakash Man Singh. Then the NC lawmakers stood up continuously to obstruct the House.

But, Speaker Mahara asked Minister Pokharel to table the amendment proposals on National Medical Education Bill prepared by the Education and Health Committee of parliament for endorsement.

Also, the NC lawmakers have been pressing the government and ruling party lawmakers not to endorse the bill without first addressing Dr KC’s concerns properly.

As soon as the speaker called the minister to the rostrum, NC lawmakers rushed to the well and encircled the rostrum to bar the minister. Then Speaker Mahara adjourned the meeting for 15 minutes to ease the situation.

The speaker convened the next sitting after a brief interval but the NC lawmakers again rushed to the well and encircled the rostrum to bar the minister from tabling the bill. The situation turned tense after over a dozen ruling party lawmakers tried to escort the minister to the rostrum while NC lawmakers continuously chanted slogans and assembled in the well.

Despite the opposition party’s serious objection, the ruling party lawmakers were consistently pressing the speaker to move the bill forward and endorse it without any delay.

“Speaker tried to proceed with the House business while the whole opposition was in the well. This is an unprecedented case of the speaker being used in favor of the ruling party,” said NC lawmaker Gagan Thapa. “Speaker cannot run the House business smoothly without first assuring us of not repeating the same approach prior to the next House meeting.”

Minister Pokharel however accused the opposition of trying to hold parliament hostage by obstructing House proceedings even as the bill was prepared following a parliamentary process thoroughly. “What is the meaning of running parliament and preparing bills if the parties aren’t ready to accept parliamentary procedures,” said Pokharel.

Chief whip of ruling NCP, Dev Gurung, accused the NC of playing a double role on the issue of addressing Dr KC’s demands. “On the one hand the NC has been demanding to address Dr KC’s demands and on the other the NC lawmakers are obstructing parliament from endorsing the bill that has addressed most of the demands of KC,” argued Gurung.

When the government makes mistakes, fails to deliver, or introduces flawed policies, people usually look up to the opposition party... Read More...

KATHMANDU, Jan 31: Nepali Congress (NC) has decided to continue obstructing parliament to protest against the government getting the National... Read More...