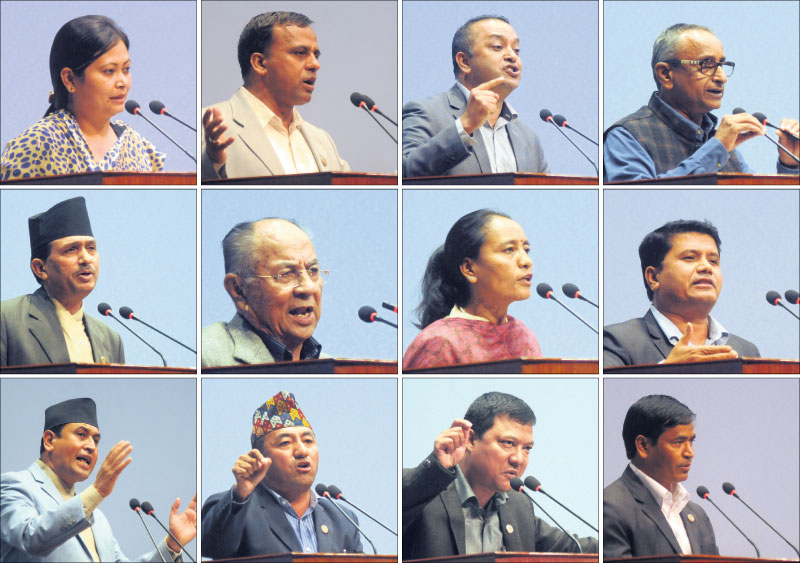 MPs across parties line up behind impeachment motion

KATHMANDU, Oct 26: Lawmakers from major political parties have stood united in favor of the impeachment motion filed in Parliament against suspended chief of the Commission for Investigation of Abuse of Authority (CIAA) Lokman Singh Karki
Members of Parliament (MPs) from various political parties, airing their views during deliberations on the motion on Tuesday, expressed strong support for the impeachment motion. Altogether 157 lawmakers from the ruling CPN (Maoist Center) and the main opposition CPN-UML had registered the motion at the parliament secretariat on Wednesday.

MPs from three major political parties - Nepali Congress (NC), CPN-UML and UCPN (Maoist) - as well as some other parties expressed strong support for the motion. Members from Madhes-based and some small parties did not make their stance clear but none of the lawmakers airing their views spoke against the motion.

Tabling the impeachment motion, Maoist Center lawmaker Mahendra Bahadur Shahi accused Karki of threatening people working in various state agencies and taking the law into his own hands. He said Karki was terrorizing people through abuse of the authority of the CIAA. Proposer of the motion Shahi brought nine allegations against Karki. He accused him of being involved in contempt of parliament, contempt of court,  exceeding his juirisdiction, spying against his critics for purposes of blackmail and running the CIAA, a constitutional body, in  arbitrary fashion.

“Karki himself is found to be misusing the authority of the CIAA to serve his and his relatives' interests and blackmailing the state agencies,” said Shahi while tabling the motion at the parliamentary meeting.

UML Chief Whip Bhanu Bhakta Dhakal, who seconded the proposal, accused Karki of runing a parallel government through the exertion of unnecessary pressure on government officials and staffers at other institutions such as universities and hospitals. Refuting rumors about the impeachment motion, jointly registered by UML and Maoist lawmakers, being as a ploy to break up the ruling coalition, he urged the parties to take the motion as a common proposal of all political sides.

“This impeachment motion is not a proposal of any political party. I urge everyone to consider it a motion of the entire Parliament and endorse it as such,” said Dhakal.

Nepali Congress (NC) lawmakers Gagan Thapa, Ramhari Khatiwada and Badri Pandey said that the impeachment motion should be endorsed by the House even through the UML and the Maoists did not consulted the NC prior to filing it in Parliament.

“We [NC lawmakers] were the first to raise our voice in Parliament for impeaching Karki and we support this motion for endorsement even though it was registered in the House while keeping us in the dark about it,” said Thapa. Khatiwada and Pandey echoed Thapa, saying that the NC would vote for the motion even though the issue is under discussion in the party.

Rabindra Adhikari of UML said that the political parties have no other option than to endorse the impeachment motion as Karki can't be removed from his post any other way.

“The head of a constitutional body has been continuously working in arbitrary fashion and Parliament cannot remain a mute spectator. It has to either let him keep on working freely or control him,” said Adhikari.

However, Kunti Shahi of Rastriya Prajatantra Party Nepal (RPPN), Jeetendra Dev of Madhesi Peoples Rights Forum Democratic (MPRF-D) and Laxman Rajbansi of Nepaa Rastriya Party said that their parties would take their decisions just prior to the voting in Parliament.

CP Mainali of CPN-ML, Anuradra Thapamagar of Nepal Workers Pesants Party and Meena Pun of Rastriya Janamorcha supported the impeachment motion. Thapamagar claimed that Karki's appointment was done at the behest of India. “With the appointment of Karki at the CIAA, the role of deciding who to  charge with corruption was transferred to India,” said Thapamagar.

The deliberations on the impeachment motion will continue at next the House meeting scheduled for November 10.