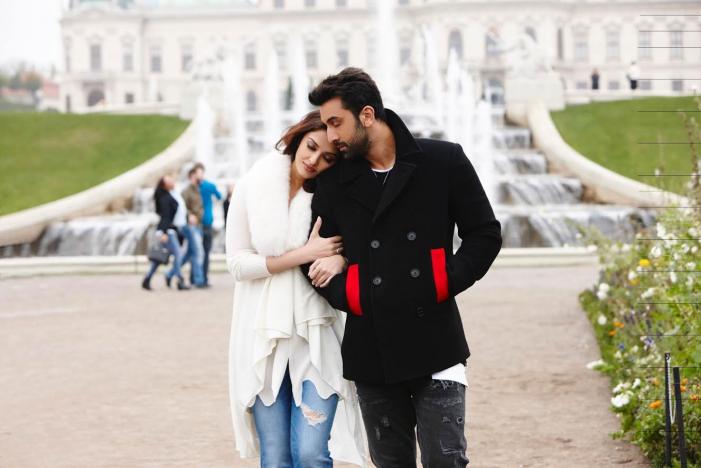 In one of the most prescient lines in Karan Johar’s “Ae Dil Hai Mushkil”, a character tells another: “Only the insecure hide behind big words.” This might as well have been a comment on the film, with all the verbosity that is encompassed in 157 minutes of this romantic drama.

For someone who has so far made what are at best fluff films about teenage love and romance, Johar seems intent on showing that he has grown up. But packing almost every minute of the film with heavy-handed dialogue (written by Johar and Niranjan Iyengar) shows he still lacks depth in filmmaking. Love is compared to wet mud and cancer, and boyfriends to movies. Also, no one seem capable of going a minute without articulating what they are feeling.

Leading the pack in the “I can’t stop talking” brigade is our hero Ayan (Ranbir Kapoor), a rich man-child (one character calls him a baby without a pram) who doesn’t have to worry about a job or paying rent. He spends all his time feeling sorry for himself because Alizeh (Anushka Sharma) isn’t in love with him. Alizeh, in turn, is hopelessly smitten by Ali (Fawad Khan) and thinks of Ayan only as a friend. A heart-broken Ayan finds solace in the arms of poetess Sabah (Aishwarya Rai Bachchan) but he still can’t get Alizeh out of his mind.

The characters hurtle through impromptu holidays in Paris, through glitzy disco numbers and lavish weddings. But in terms of storyline, nothing actually moves. Some scenes remind you of Imtiaz Aliwhile others have a decidedly Sanjay Leela Bhansali feel, but Johar doesn’t seem to be sure of his voice. His characters talk as if they are spouting lines from a book and offer so many homilies about life and love that they are likely to put self-help books out of business.

In attempting to make a grown-up love story, Johar parodies his biggest strength – he makes fun of the whole dancing-in-the-snow-in-a-chiffon-saree genre that he and the Chopras are known for. But he is also unable to make the leap to the Imtiaz Ali school of film-making, and ends up in a no-man’s land.

Of the cast, Ranbir Kapoor manages to bring some empathy to what could have been a very whiny character, while Anushka Sharma is too smarmy and smug for her own good. It is Aishwarya Rai, who speaks the least and flutters her eyelashes to full effect, who is the most effective performer. Fawad Khan doesn’t have much to do in his miniscule role. “Ae Dil Hai Mushkil” has neither gravitas nor the charm to be worth remembering.

MUMBAI, Oct 23: Actress Aishwarya Rai Bachchan on Saturday said there is no skin show or liplocks in her upcoming film... Read More...