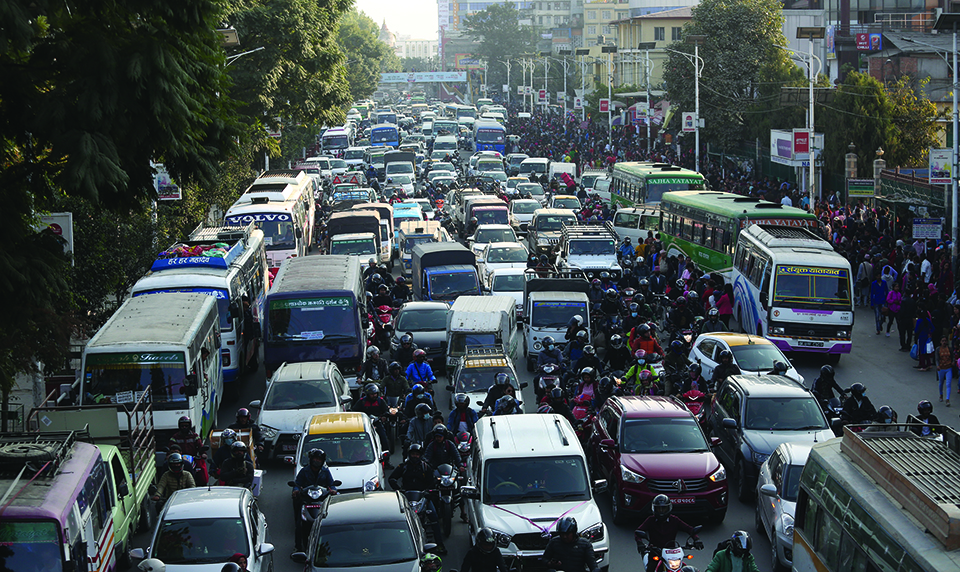 Have you seen ants stuck in traffic? Researches have proven that if we all drove more like ants walk, we would experience fewer traffic jams

Over the last decades, vehicle populations have significantly increased worldwide. Such heavy growth has caused massive traffic congestion resulting in high probability of road accidents. According to Department of Transport Management (DoTM), the total number of motor vehicles running across Nepal has reached nearly 3.1 million as of mid-May. The Department registered 1,691 minibusses, 957 mini-trucks, 3,966 units of heavy equipment, 7,651 units of cars, jeeps and vans, 4,154 pickup vans, 10,076 three-wheelers, 6,189 power tillers and 6,131 e-rickshaws as of mid-May of fiscal year 2017/18. Similarly, 183,217 new motorcycles were registered during the period.

In such context, traditional control mechanisms are not able to provide sustainable solutions to traffic congestion because the flow of vehicles in Kathmandu is always non-linear and it requires high intelligence system to understand the traffic pattern. Also, the traffic condition changes on an hourly basis as early morning traffic and daytime vehicle flow pattern are very different. Therefore, the control tactics should also be highly responsive.

Due to drastic rise in traffic networks and haphazard vehicle culture it is complicated to make a real-time implementation of current traffic control model in Kathmandu. Therefore, Nepal should experiment with new and innovative traffic solution method, at least inside the valley, immediately.

If we observe the colony of ants at march, we might remember the highway bustling with traffic. It takes at least half an hour to drive from Lainchaur to Purano Buspark during the peak hours, which is a seven-minute drive in normal times. In other words, people spend more than half an hour on an average in congested traffic. This holds true to the distance between New Baneswor to Balkumari or Balaju to Ratna Park.

Have you ever seen ants stuck in such traffic? Thousands of them walk together in a narrow trail. Many researches have proven that if we all drove more like ants walk, then we would experience fewer traffic jams. Ants, termites and other swarms have something in common that humans don’t. Unlike swarms human drivers never put aside their own interests to make smooth traffic happen. This is why some researchers have even suggested implementing an insect’s mobility algorithm in human road behavior to ensure sound traffic like swarms.

Swarm Intelligence is a subfield of computational approach related to the evolution of bio-inspired intelligent systems. This system uses the collective mobility behavior of natural agents such as the colony of ants and flocks of birds as an inspiration to recreate their guiding algorithms. Those algorithms have been proven as an efficient mechanism in solving real-world problems. Scientifically speaking, to solve real-world traffic problems using swarm intelligence algorithms, we need a mathematical representation of our traffic cognation data, which would describe our problem and all the decision variables leading to the problem. Then we can graph the optimal solution mechanism accordingly.

In fact, Ant Colony Optimization (ACO) algorithm has already been applied to solve traffic-related problems, such as vehicle routing problem and traffic cognition, in many places. Ant-based systems have special properties such as adaptability, dynamicity, and scalability which are the main requirements for solving vehicle traffic congestion. Cars also move like ants, they leave pheromones in terms of perceptional signals—braking lights, turning lights and changes in speed.  Moving cars sniff pheromones released by other cars and adjust their speed and direction accordingly.

Dr Iain Couzin, a mathematical biologist at the University of Oxford, studied army ants as well as other swarming animals and discovered simple rules that allow swarms to work so well. Deciphering those rules was a big challenge because the behavior of swarms emerges randomly from the actions of thousands of individual ants. To understand the pattern of swarms he builds a computer model of virtual swarms. He found that each virtual ant leaves a chemical marker that attracted other ants while the marker remains still fresh. Each ant could sweep the air with its antennas if the air made contact with another ant it would turn away or slow down to avoid the collision.

In the case of army ants returning to their nest with food in a dense column, incoming lane is bordered by two lanes of outgoing traffic thereby making three-lane highway to avoid crash.  Are humans different from army ants?

Next time you are on the busy crossroad, watch out. We naturally form similar lanes in crowd while walking. But whenever we get on wheels, we think more about minimizing our travel time and do not consider other moving vehicles. We change the lanes and sneak our two wheelers wherever we see space.

It’s also discovered that ants impulsively form highways. If the ants going in one direction become dense, their chemical trails attract more ants heading the same way. This response directs other ants to form a single packed column. The ants going the other direction will turn away from the oncoming traffic and form adjoining lanes. In short, the secret to such robust mobility management in ants was because of cooperation and the strong sense of common interest.

Indian physicist Apoorva Nagar argues that there are three main reasons ants don’t jam up. First, according to her, ants don’t have egos and they don’t show off by zooming past people. Second, they do not mind a few accidents or collisions unless there’s a serious pileup. They just keep moving. Third, ants seem to get more disciplined when paths get crowded—something which humans are notoriously bad at. They’re less likely to make unexpected moves in such sort of heavy traffic.

We have a stable government and the prime minister often talks about technological revolution. This is the right time to experiment with ant-model traffic. There have been several researches on swarm intelligence in traffic behavior regarding how to get precise traffic frequency, the way to module traffic signals and maintain systematic traffic behavior.

If Nepal pays heed to some of those innovative approaches of traffic management and implements them on Kathmandu roads, it will surely minimize the traffic congestion we are experiencing on a daily basis.

The author is a Senior Researcher at Global Initiative For Vivid Empowerment, a

Professors and lecturers have been using insulting words while talking to students but students are not able to speak up Read More...

For realizing the changes, our universities must shift some weight of teaching to learning, knowledge to skills, exams to... Read More...

Let us show our flag to the world, as the symbol of our unity and our dreams, and as a... Read More...