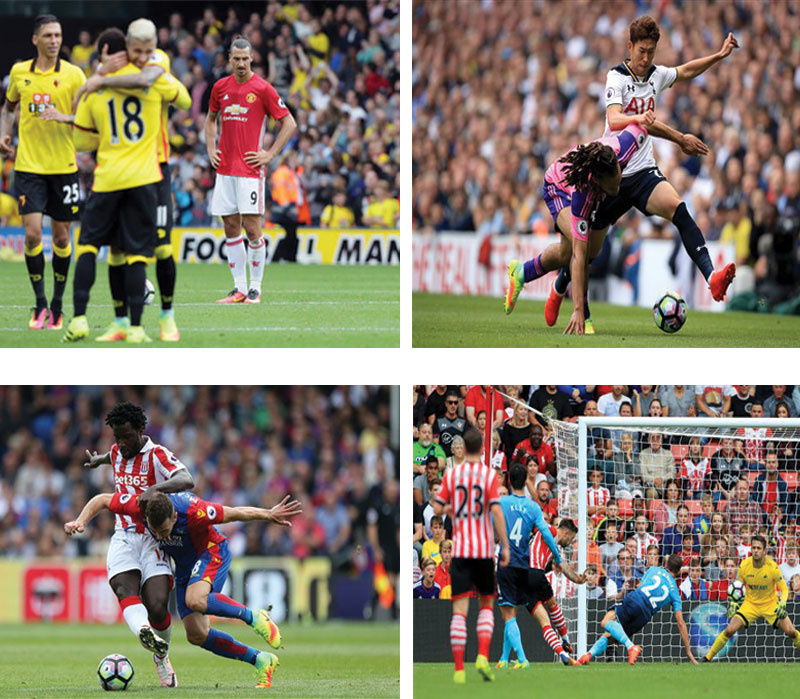 LONDON, Sept 18: The footballing divide in Manchester is becoming clearer a month into the season.

On the blue side, Pep Guardiola is thriving at the start of his Manchester City career with five wins out of five in the Premier League.

On the red side, Jose Mourinho is discovering the toils David Moyes and Louis van Gaal endured trying to live up to Alex Ferguson's high achievements during his 26-year reign at United.

After opening the campaign with three successive wins, the record 20-time English champions have now lost three games in around a week.

United's 3-1 loss at Watford on Sunday — ending a 30-year unbeaten run against the club based north of London — followed a losing start to the Europa League on Thursday at Feyenoord in the Netherlands. The miserable sequence started last Saturday by losing the first Manchester derby of the season to Guardiola's City.

"I feel that some individuals probably feel the pressure and responsibility too much," Mourinho said at Vicarage Road. "We started the season very well with (winning) the Community Shield and three victories in a row in the Premier League, the best start that a new manager has had at ManchesterUnited I think.

"But was I thinking that my team was ready, perfect, unbeatable? Not at all. I was completely aware that we were not perfect, with lots of players who are not end products and can make their own mistakes."

Although 18-year-old Marcus Rashford marked his first start of the season for Mourinho by canceling out Etienne Capoue's opener, Watford surged back in front in the 83rd minute at Vicarage Road. Substitute Camilo Zuniga scored within a minute of coming off the bench and Troy Deeney netted a penalty in the fifth minute of stoppage time.

It's only five games into the Premier League season but United is already six points behind the leaders — Guardiola's City.

"We have to improve, no doubt, individually and collectively," Mourinho said. "And that's my job."

If not Manchester United could be missing out on the top-four again and face another season out of the Champions League. But there's a long way to go in the season.

Here is a look at Sunday's other games:

Moyes is trying to revive a reputation tarnished by his time at United at a club renowned for its struggle to stay in the Premier League. Five games into the season, Sunderland only has one point after this fourth loss.

It was a mixed day for Tottenham. Harry Kane scored in consecutive league games for the first time since March by tapping into Sunderland's goal in the second half. But the league's top scorer in the last campaign was stretchered off toward the end of Sunday's fixture at White Hart Lane with an ankle injury.

Kane left the stadium on crutches and Tottenham is waiting to discover the extent of the injury after scans on Monday.

There was an element of mystery over why Sunderland defender Patrick van Aanholt never even started the game, having been removed from the starting lineup during the warmup and replaced by Jason Denayer.

Moyes cited "medical reasons" but, when pressed on detail, responded: "I would always like to be straight but I'm giving what the best answer is."

Like Sunderland, Stoke has only a solitary point after being condemned to a fourth straight league loss on a trip to south London.

Stoke collapsed inside 11 minutes at Selhurst Park, with goals from James Tomkins and Scott Dann seizing control of the game. Another goal burst came in the second half when James McArthur and Andros Townsend netted inside four minutes, while Marko Arnautovic got Stoke's only goal in stoppage time.

Claude Puel's wait for a win as Southampton manager is over thanks to Charlie Austin's goal. The substitute striker also got the south-coast club's Europa League campaign off to a bright start on Thursday by netting twice against Sparta Prague.

Southampton has 5 points from five Premier League games, while Swansea is a point behind.

Southampton, England, Jan 26: In a week when the future of FA Cup replays was called into question, Tottenham Hotspur and... Read More...