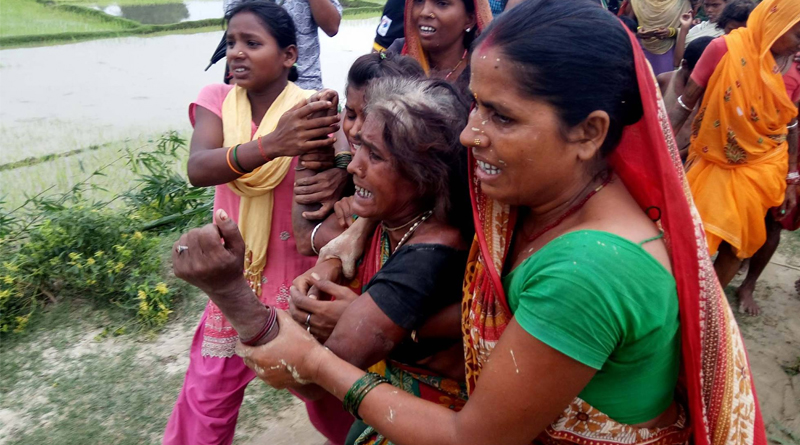 Dhanadevi reacting after her husband Domi Yadav was buried by a mound of earth on the bank of the Khando River in Saptari. (Photo by Jitendra Kumar Jha)

SAPTARI, August 10: A man has gone missing after being buried by a mound of earth that caved in due to erosion at the base by the Khando rivulet in the district.

Domi Yadav, a local, was buried while he was working along with Nepal Army and Nepal Police to control the floods. The incident took place at 12:40 pm.

The Khando rivulet swollen by monsoon is creating mayhem in the areas including Beraul and Deuwari Bharuwa of Rajbiraj-15 since early Thursday.

Nepal Army, Nepal Police and Armed Police Force have been deployed in the incident site.

Yadav, 60, was also working with the security personnel to control the erosion.

Over 400 houses were inundated after the overflowing Khando rivulet changed its course and entered the human settlements.

Earlier, on August 1, Khdando rivulet had wrecked havoc on the area including Tilathi.

Mars is 1000X drier than the driest places on Earth

July 28: For generations, many have dreamed about the day when it would be possible to set foot on Mars... Read More...

SAPTARI, March 6:  A person died on the spot after the cadres of the agitating United Democratic Madheshi Front (UDMF) clashed... Read More...