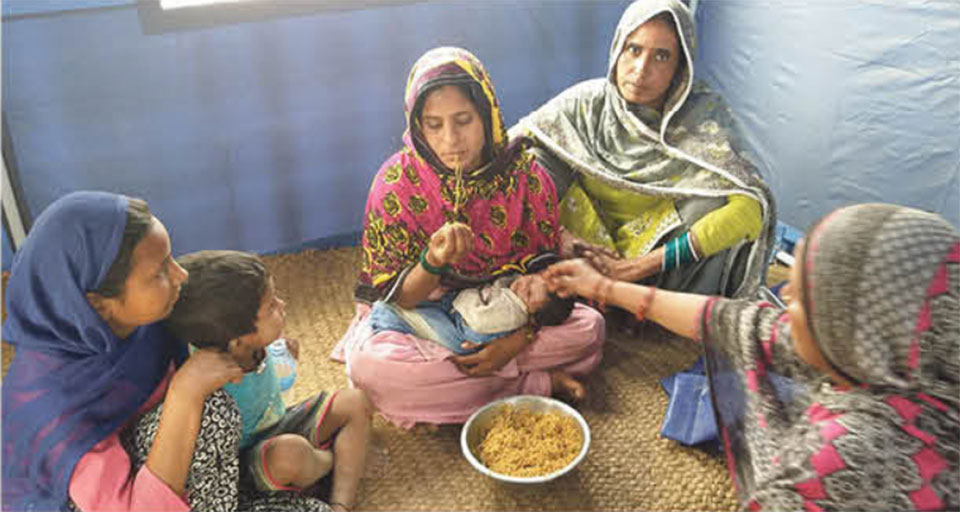 Rekhma Khatun along with her newborn daughter and other family members.

BARA, April 7: After losing her six years old son to the deadly tornado a week ago, Rekhma Khatun is found wandering places clutching her 20 days old daughter by her chest. Despite crying for a whole week, her eyes are still wet. Her family members try to console her but that further breaks her into tears.

She is unable to eat anything since losing her school-going child and a house to the unprecedented disaster. It's not like the family members or relatives have not tried to feed her but she refuses to eat. She is currently living in the temporary shelter prepared by the Nepal Army in Feta Rural Municipality-6, Purainiya. Rekhma and her family has been relying on noodles and beaten rice for a week.

They have been offered food but they lack water for cooking. "It's hard for us to manage water for cooking when we are struggling for drinking water," said her husband Firoj Ansari. He says the health of their newborn daughter has been affected as his breastfeeding wife refuses to eat.

As the tornado destructed a large number of houses in Purainiya, the village has nothing more than rubble. Everything is messed up. "Now we have nothing in the name of assets. All we can do is hope for better relief from the government," said Firoj. He laments that he has not been able to provide proper shelter and nutritious diet to his nursing wife, which is very essential during this time.

The situation is no different for other pregnant and nursing women in the village.Shairunesha Khatun, 21, has been satisfying the hunger of her one-year-old son by offering him an empty bottle of milk. She also has a four-year-old son who keeps asking for milk.

Another nursing mother Apsana Khatun, 25, laments that most relief materials consists of dry food items which are not good for pregnant and nursing women and their infants.

It has been equally hard for the menstruating girls and women who have been obliged to defecate in the open.

MAHOTTARI , May 19: The pregnant women, new mothers and newborn in Mahottari Rural Municipality in Mahottari district are at risk... Read More...

Prithvi Highway resumes after 11 hours of disruption
34 minutes ago