Most valuable player to receive ‘Golden Shoe’ in Ruslan DPL 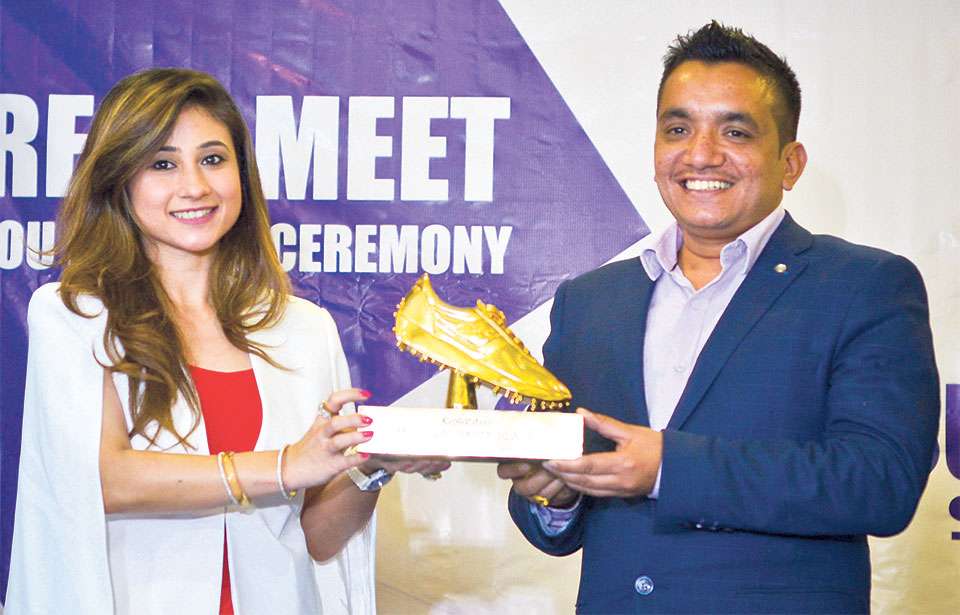 Director of Kiran Shoes Manufacturer, Bidhakshi Rana and Chairman of Dhangadi Cricket Academy, Subash Shahi unveil the golden shoe to be presented to most valuable player of Dhangadi Premier League 2018 during a press meet in Kathmandu on Sunday. Photo: Bijay Gajmer/Republica

KATHMANDU, March 26: Ruslan Dhangadhi Premier League (DPL) has extended its contract with the Kiran Shoes Manufacturers’ Gold Star Shoes as official footwear for the second season of the event set to be hosted in Dhangadhi from March 31. The premium footwear brand of Nepal will award the most valuable player of the tournament with a ‘Golden Shoe’, which was unveiled at an event in Kathmandu on Sunday.

“We are happy to continue our partnership that started in the first year itself. It is the result of trust that the brand and the tournament have on each other. It will keep growing each year,” said Shahi.

Similarly, Rana was happy to be associated with the DPL once again after the successful first season. “We know how popular cricket is in Nepal and Dhangadhi. It is a proud moment that we received an ODI status and I am confident that cricket can achieve much more in this country. We are happy to have our share of contribution on cricket via DPL,” said Rana.

The technicians and officials will decide the most valuable player of the tournament based on the impact a certain player creates in the match. It is an award in addition to the man of the series award. Nepal’s major shoe brand Gold Star will contribute Rs 1.6 million in the tournament as part of the contract deal for the second season, which includes Rs 900,000 in cash and Rs 700,000 in kind.

A total of six teams including Kathmandu Goldens, Biratnagar Kings, Rupandehi Challengers, CYC Attariya, Mahendranagar United, and the defending champions Team Chauraha are taking part in the tournament. The auction was held on February 21 in which a total of 72 players were sold. Basant Regmi, Karan KC, and Aarif Sheikh were among the highest earners from the auction.

The International Cricket Council (ICC) has approved the second edition of the Ruslan Dhangadhi Premier League (DPL) on March 14.

Infographics: Kane is the most valuable player

According to the latest calculations from CIES Football Observatory, England captain and 30 goal Tottenham striker Harry Kane is the... Read More...