Most slaughterhouses operating against standards and without permit 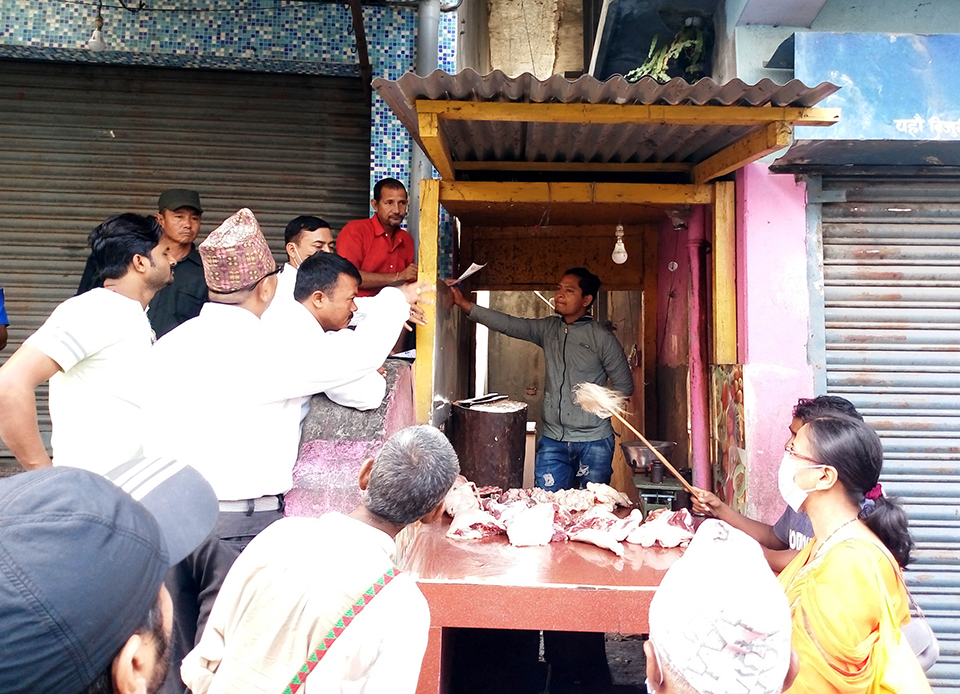 DHARAN, Oct 9: Local units in Dharan have intensified market inspection after being widely criticized for not monitoring the market on a regular basis.

Committees formed by Dharan Sub-metropolis inspected the meat shops not just once but twice within a week. The first inspection was conducted on Thursday and the second on Sunday. The committee monitored altogether 11 slaughterhouses of Dharan-9, vegetable market of Gautampath, Putaliline and Rangachowk, according to Bheshraj Ghimire, Inspection Officer of the sub-metropolis.

Especially the shops within the vegetable market of Gautampath were found slaughtering chicken inside the shop. As per the standards, the slaughterhouse must be separated from the place where meat is kept for selling. Meat must be stored in a refrigerator before selling but in most of the places, it was kept in open.

"They are playing with the health of consumers by selling meat under zinc roofs and not separating meat shops with the slaughterhouses," said Bishnu Tamrakar, regional vice-chairperson of Forum for Protection of Consumers Rights, adding, "This will be controlled only if the market is monitored regularly and stern action is taken against those putting the consumers' heath at risk."

As per the Animal Slaughterhouse and Meat Inspection Act 1999, it is compulsory for all meat shops to seek permit from the Livestock Service Office. However, none of the meat shops inspected on Sunday had the permit. The inspection committee gave written suggestions to all meat shop owners so that they can make improvements. Ghimire said that stern action would be taken against them if they are found not implementing these suggestions during the next inspection.

KATHMANDU, August 23:Festive season is round the corner, and like in the past, vegetable prices have skyrocketed. But a special... Read More...

KATHMANDU, Oct 23: The Industry, Commerce and Consumers' Welfare Committee has garnered information from the Ministry of Supplies whether it... Read More...

27 monkeys drown in pond
1 minute ago