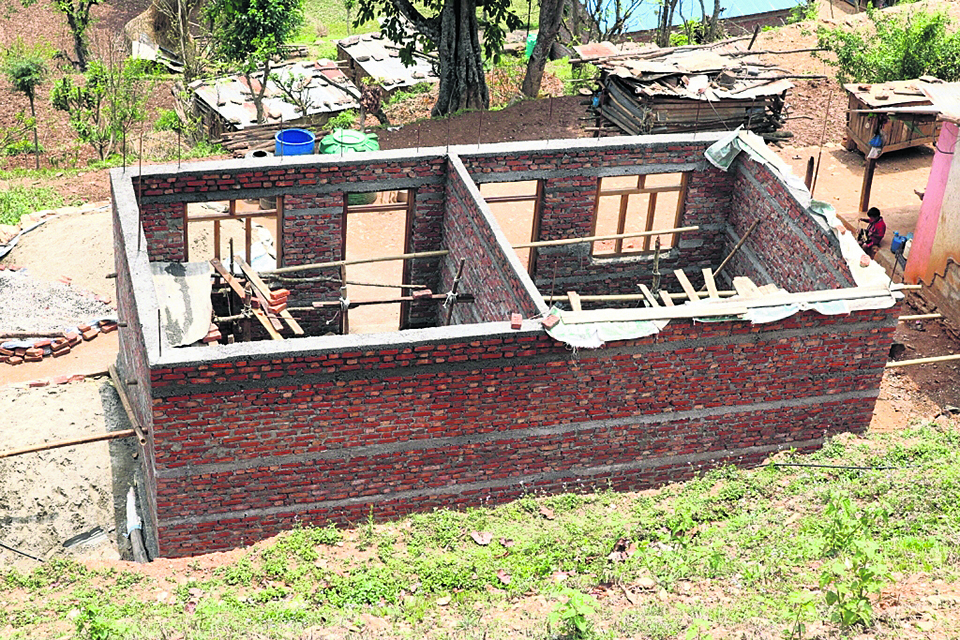 An under construction house in Nilkantha Municipality-8 of Dhading. Photo by: Sarita Shrestha/Republica

DHADING, May 3: The deadly earthquake which shook the nation four years ago rendered tens of thousands of people homeless. Especially, the houses in the rural parts were damaged more.

In a bid to help the victims, the government started distributing reconstruction grant in three installments. However, most of the houses rebuilt by using the grant are barely usable and are more like sheds.

Some of the reconstructed houses in Dhading cannot even be used for living. Especially, the locals whose houses sustained minor damages but who still managed to get the grant provided by the government have built such houses. Their newly-built houses can be only used as shops. They reflect how the government budget has been misused in the name of reconstruction.

As the earthquake damaged his three-story house, Som Bahadur Kumal of Nilkantha Municipality-12 demolished two of the upper stories and started living in the ground floor. “We could not manage money for building a new house. So, we removed the damaged part and constructed a two-room house as per the new government standards,” said Kumal.

So many people have accepted the grant to build new house but most of them are still living in their old buildings after minor repairs. Likewise, some have tried to save the grant money by building small, two-room houses as building such houses is less costly. These kinds of houses are rampantly found in Nalang, Darkha, Salang, Kumpur, Benighat, Baseri, Budhathum, Jogimara, and Aginchowk, among other villages of Dhading.

However, the beneficiaries claim that they built the houses as recommended by the engineers. Due to the lack of proper inspection by the National Reconstruction Authority (NRA) and the local government, even brothers living in joint families have managed to grab the reconstruction grant and have built houses with just one room to show to the government authorities.

The rooms of some of these houses are so congested that it is not possible for a person to sleep with his/her legs fully stretched.  According to the technicians, the houses built by the beneficiaries meet the standards set by the government but cannot be used for living. Rajendra KC, chief of the District Project Implementation Unit (DPIU), Dhading, informed Republica that many people, just for the sake of getting the grant, built one-room houses in a rush.

“Looking at the kind of houses built in the villages, we have been questioning ourselves that does that met the requirement of public?’ said KC.  A total of 83,041 households in Dhading are listed as beneficiaries. Of them, 74,153 households have signed agreements for the grant. According to the statistics maintained by the DPIU, 42,530 beneficiaries have reconstructed their houses.

Reconstruction has contributed to building, a prosperous and strong Nepal: NRA Chief Gyewali

The National Reconstruction Authority (NRA) is marking its fourth anniversary tomorrow. It is said the Authority set up after the... Read More...

What next about NCP after the court verdict?
3 hours ago