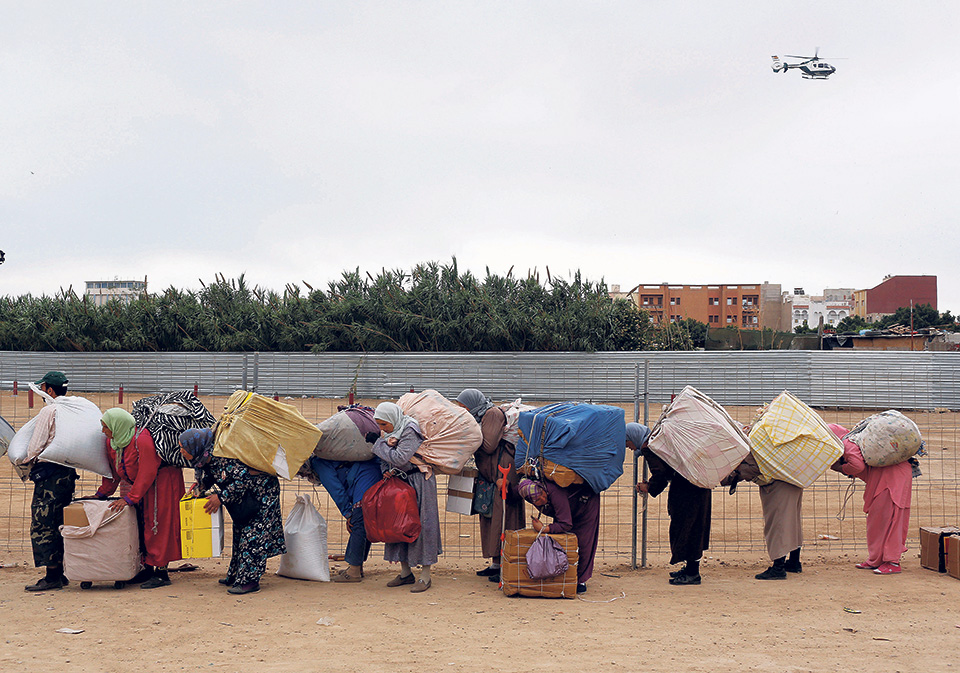 MELILLA, August 27: In a winding early-morning queue, Jemaa Laalaoua hunches over with 50 kg (110 lb) of kitchenware on her back, waiting to cross back into Morocco from the Spanish enclave of Melilla.

The 41-year-old mother of eight is one of thousands of Moroccans who eke out a living by walking loads of merchandise from Melilla into the northern Moroccan province of Nador.

Goods including metal kettles that Laalaoua was carrying are counted as personal luggage and are not taxed, allowing for a small mark-up when they are shipped on and sold on across Morocco.
“On average, I earn about 70 dirhams ($7.40) per trip, carrying anywhere between 40 to 70 kg,” says Laalaoua. “But most days, we never know how much we will make.”

The work is backbreaking and fraught with risk. Some traders have died in stampedes through the tight border crossing.

“We say our prayers in the morning and brace for the day, not knowing if we will come out dead or alive,” Laalaoua says.

She lifts undergarments to display bruises on her leg from a Spanish Civil Guard’s truncheon. She says she was beaten for attempting to advance towards the front of the queue. No one from the Civil Guard in Melilla was available to comment.

When Laalaoua finally gets through the narrowly caged border crossing, she weaves through the crowd to drop off her cargo inside the bustling Beni Ansar market, before rushing back to a Melilla warehouse where she will load up for her last trip of the day.

Locals with an address in the Nador province are allowed to cross through into Melilla without a visa, but cannot spend more than a day in the Spanish enclave. They can cross for five hours a day, four days a week.

In total, there are between 30,000-40,000 crossings daily, according to the Spanish border police.
The practice has been going on for decades. Before, it was dominated by single mothers known locally as “mule women”, who struggled to make a living elsewhere.

But as unemployment has climbed, the women have increasingly found themselves in competition with young men.

Each morning the women report to a boss who tasks them with transporting an assigned quantity of goods, coordinating with warehouse owners and shippers.

By 5 am crowds of hundreds swell to thousands, as people wait for Spanish guards to open the border gates. Male traders fight and women shout and scream as the jostle for a place in the crush.

Most manage to make two or three crossings before the border shuts again.

The merchandise spans everything from simple household goods such as towels, toilet paper, and soap, to illicit wares including alcohol and plastic bags, which have been banned in Morocco since last year.

Laalaoua lives nearly 27 km (17 miles) from the border, waking up at 2 am to prepare for her commute, by foot then taxi or bus.

Her husband Mohammed Zoubah, 57, fell ill six years ago, forcing Laalaoua to become the primary breadwinner. “She’s strong, she’s protecting this household,” he says. “May God bless her with patience.”

SIRAHA, Feb 13: A huge number of Nepali population residing in the border areas are obliged to live a wretched life... Read More...

SIRAHA, Feb 13: The Nepali people living in areas near the country's borders are deprived of various state services and privileges.... Read More...