Essentially a doodle is a drawing made while a person’s attention is otherwise occupied. You can find yourself doodling when talking to someone on the phone, while listening to a lecture in class, or during a boring presentation at work. Everyone almost always has some form of scribbles or random sketches on the last pages of their notebooks. However, doodle has grown to become more than just mindless scribbling. It has become a part of an art form that’s actively chosen as a medium by artists to showcase their talent and creativity. 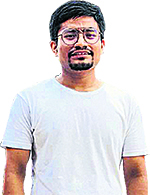 One such artist is Bikash Man Shakya. He graduated from Kathmandu University with a degree in arts and now works as a graphic designer and a doodle enthusiast. Shakya started doodling in 2015 when he suddenly had a long break from school. It was after the earthquake. “I had a lot of time to spare and I wanted to channel my mind and creativity into something and that something turned out to be doodling,” he says adding that he also needed something to channel his emotions during the time of such massive calamity.

According to Shakya, when he first started to doodle as more than just a hobby, it was at a stage when it wasn’t considered art or something even remotely close to art in Nepal. This, he says, has completely changed in the current context and we see doodles being used in cafes, graffiti as well as other forms of art. “As the essence of doodling lies in spontaneity and free flow, it can’t be designed beforehand and replicated. This is also one reason why it took time for doodles to be recognized as a genuine art form,” he explains.

On Shakya’s Instagram page (@doodlemyan), you can see how Shakya has evolved as an artist over time. In the beginning, his doodles were more about abstract themes as well as mandalas whereas now he is drawn more towards scripts, typography, and calligraphy like the Ranjana script. You can also see that Shakya is comfortable working in both paper and graphic medium. In Shakya’s case, his doodles don’t seem like mere drawings someone did while being occupied with something else (as suggested by the definition of doodle). They tend to hold certain ideas all the while looking very aesthetically appealing.

Moreover, the themes of his doodles seemed to be heavily inspired by things that are unique to Nepal – be it “tudals” at a temple or a simple “karuwa” that we all have at home. He also experiments with contemporary themes through his doodles and doesn’t like to stick to a certain style. That is precisely why all his works are different from one another. Every once in awhile Shakya also takes up commissioned works. He has worked for Yakety Yak, a hostel in Thamel, Dancing Yak, and his products are available at Jamarko in Jhamsikhel, Lalitpur as well as Bhav Products in Freak Street, Basantapur. You can also order badges from Shakya’s Instagram store (@doodlemyanstore) by sending him a message there.

Shakya recalls while working for Yakety Yak hostel, the owner was fascinated by how Shakya was doodling. “At first, he was slightly alarmed at how I had no fixed design to show him and I started using color straight away without any shading,” he says adding that when he saw the entire flow and fluidity of the process, he was very impressed. “This is why I’, extra careful while taking commissioned work. The client has to have total trust in my skills and respect the fact that doodling is not like other art forms – it shines when it’s let loose and free,” he explains.

Even though he likes doodling and takes up projects whenever he can, he stresses on the fact that doodling is not his actual profession. “As a graphic designer, even though we get to create art and play with ideas related to art, it’s mostly client-oriented and there is a certain restriction of creative freedom,” he says, adding that this is where doodling acts as a welcome break from the monotonous life and it feels like that one thing he can do for himself. “Doodling is my intimate and personal escape,” he adds.

However, even though doodling is how he escapes the humdrum of daily life, like many other artists he too tends to suffer from creative blocks. “There are days when I hit a slump. I feel as though nothing new is coming to my mind and I feel insecure about my drawings,” he says.

Shakya compares it to the difficulty in getting back to reading after a long break, even if you were an avid reader in the past. “Times like these are when I have to push myself and sit down with a pen and paper and get working,” he says adding that doodling is a subtle yet stable part of his life and he wants to make sure he doesn’t give it up because of any reason whatsoever. In the future, he says, he wants his doodle work to be a medium through which he can make a valuable contribution in his community.

Smart lockdown to be enforced, int’l flights to resume
40 minutes ago

Smart lockdown to be enforced, int’l flights to resume
40 minutes ago