More than a victim 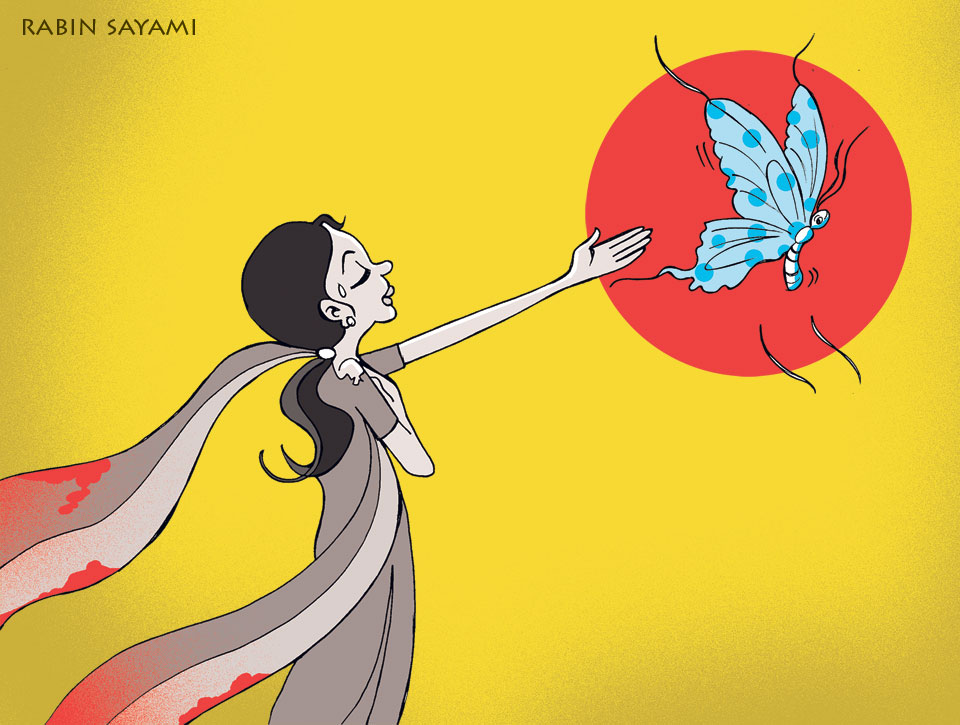 Often when it comes to cases of sexual abuse or harassment, it’s the occurrence of the event that steal the headline and becomes the talking point. The trauma of the incident though tends to linger. Survivors of sexual assault, big or small, can testify to that. However, self pity isn’t an option insist psychologists, organizations working with the victims, and the victims themselves. Priyanka Gurung reports.

When a statement like “Today, I was sexually harassed”, pops up, in all capital letters on your newsfeed, you naturally pause. It turned out to be an acquaintance’s status update. After a regular commute to work turned into a nasty encounter with a groper, she went on a long rant.

However, there was a lot of – “Oh, can a woman not go to work in peace?”, “Why do women have to deal with these things,” – kinds of sentiments being expressed over and over again.

In an empowering move, many Nepali women are taking to the public platform to express their harassment experiences. But, even in instances where we are trying to stand up for ourselves, must we paint ourselves as victims?

Unfortunately, discussions of how one can recover from sexual abuse or sexual harassment isn’t exactly considered a sit down tea topic. Even now, if the advice isn’t to try and forget about the incident, it is to find other distractions.

But then, there are places like Rakshya Nepal where accounts of sexual abuse are unavoidable. And the stories there don’t just end with encounters; they bring forth many examples of courage and character.

As an organization that was established to help end exploitation of vulnerable women and children, they always have many trafficked as well as rape victims to attend to. They keep their gates locked at all times and have, for years now, even bought down their organization’s name board, all for security reasons. Inside the compound, Chairperson Menuka Thapa talks about her survivors.

“Yes, you were abused. That happened. But what next? That’s the question we want to help all the girls and women ask themselves,” Thapa starts explaining, “But to get there we found that we have to really work on changing their own mindsets.”

Muna Nepali, 22, one of the girls who went through the rehabilitation, shares her daily routine. From yoga in the morning to computer classes, self defense classes, stitching/designing workshop to counseling sessions and attending talks of guest speakers like Yogi Vikashananda or reproductive health experts every other week or so, she, like other rescued women, has a busy schedule.

Thapa shares, they quickly realized that just talking to the girls and giving them a safe haven wasn’t enough. Apparently, what did speed up their recovery process were lessons and activities that helped develop their skills as well as their personalities.

Muna volunteers to explain sharing her own experience. After losing her parents at a young age, her life spiraled out of control and, before she knew it, she found herself being set up to work at a brothel somewhere in Thamel. She was barely 13 years old then.

She remembers the brothel manager putting heavy makeup on her. She suspects they drugged her food to make her more complacent as well. Then, there were the men, the abuse.

“It’s easy to let all those things define you. In fact, you don’t even have to try,” says Muna, after a pause. But she talks about how the senior staff at Rakshya Nepal encouraged and urged her to participate in all the activities. “I didn’t understand the use of it initially, but now it’s clearly had an impact,” she says.

These days, Muna even helps the organization with the administrative work. This, in turn, has given Thapa an idea. She shares that now she plans to eventually run her office with the help of the women at the treatment center itself. According to her, the bottom line they are trying to convey is simple; a woman is more than her gender, her sex.

Still, despite the slew of her organization’s sponsored activities, Thapa admits that the recovery rate is 50-50. Apparently, some women find it very difficult to shake off the emotional baggage of the incident and focus on moving ahead with their lives and future.

Thapa doesn’t hesitate to put the blame for this squarely on the way our Nepali society tends to raise their daughters. “Every Nepali woman has her own list of things that her brothers or male friends are allowed to do but she isn’t. There are limits, expectations, rules imposed on us since we are born. This mentality tends to have dire consequences in case of abuse,” she states.

Ganga Pathak, chief psychologist at the National Institute of Psychology, also reveals that most women who come to her, seeking counseling for sexual harassment and abuse, tend to be wracked with guilt. Dr Pathak states that even though her patients had suffered many of them thought they had caused it or could have stopped it. On the other hand, those who weren’t blaming themselves for the incident were guilty about not being able to move on.

Thapa also reveals that a wife of a well-to-do neighbor around the Rakhsya Nepal office too is being abused. They know because they have heard the shouts and seen the bruises but they find themselves unable to rescue her. The abused wife refuses to seek help.

When Thapa discreetly talked to her about the situation, the wife apparently mentioned her kids. Then, she says, the wife talked about how her parents are putting total faith in her to keep their family together.

“It’s double standards like this that has time and again proved to be treacherous. Expect these attacks on women to continue if parents choose to keep putting down their daughters for her gender,” concludes Thapa, further adding, “If she is empowered, who would dare to hurt her? She would stand up for herself.”

Dr Pathak agrees. She explains that harassment and abuse cases are very common at her office. They tend to be teenage girls as well as mature educated women from various professions, be it those working in NGOs, INGOs, media or corporate houses. According to her, it would be a mistake to stereotype the type of victims, perpetrators, and the circumstances.

“Just recently, I had a 26-year-old who works for a NGO come over,” shares Pathak, “Apparently, on a work trip, one of her colleagues made inappropriate advances at her and she didn’t know how to ward him off. Her hesitance at the moment further escalated things and now she is losing sleep over it.”

Pathak points out that matters of self esteem, knowledge, exposure all come into play here. It the reason she wants topics of sex and reproductive health to not be a taboo. She believes if more people talked about it, there would be fewer chances of them being caught off guard.

Muna says that in her years at Rakshya Nepal she has heard all these stories and then some more. She says she understands the confusion, the guilt, the anger, the hopelessness. Personally, she refrains from giving advice on dealing with the whole mixed bag of emotions. She confesses that she too has resigned to the fact that she will never be able to let go of her past as a victim.

But of late, she has found a reason to not grumble about it. She insists that she is determined to be more than just a cautionary tale. She says she has more to offer. Every woman does, despite her gender.

Britain's Prince Harry sought counselling in his late twenties to help deal with the grief of losing his mother more... Read More...

‘More than one reason why impeachment deliberations put off’