More than 62 million South Asian people will be forced to migrate from their homes due to climate disasters by 2050: Study

KATHMANDU, Dec 18: More than 62 million South Asian people will be forced to migrate from their homes due to climate disasters by 2050, a new study said on Friday.

The study titled "Costs of climate inaction: displacement and distress migration" carried out by ActionAid International and the Climate Action Network South Asia stated that political failure to limit global warming to below two degrees Celsius, as per the Paris agreement goal, is already driving 18 million climate migrants from their homes in 2020.

The study has estimated that climate migration will treble in South Asia alone, a region badly affected by climate disasters, including floods, droughts, typhoons and cyclones.

The new research which is unveiled coinciding with International Migrants Day has broadened the analysis to incorporate new drivers of climate migration, which include loss of biodiversity and up to date scenarios of sea level rises and global warming.

The research was undertaken by Bryan Jones, one of the authors of the inaugural Groundswell Report on internal climate migration in 2018. 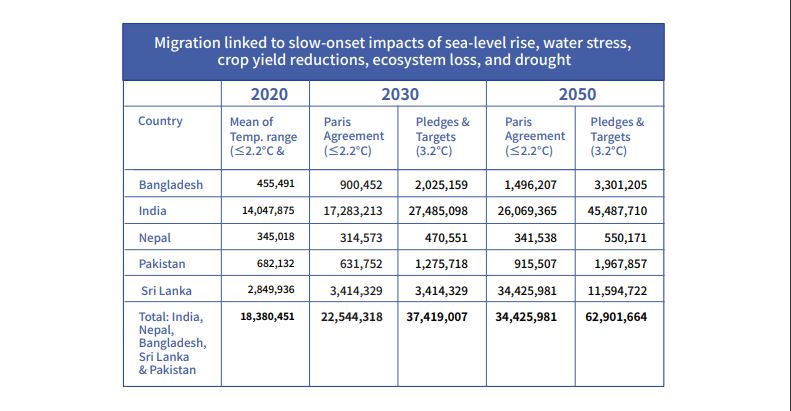 The report has assessed climate-fuelled displacement and migration across five South Asian countries of Bangladesh, India, Nepal, Pakistan, Sri Lanka, and calculated a devastating likelihood of more than 60 million people being homeless and displaced by 2050 in South Asia alone.

This is almost as many people as are forced from their homes globally due to war and conflict, raising the alarm that climate can no longer be overlooked as a major factor driving displacement.

Climate migration could easily surpass conflict as a driving force of displacement if political leaders continue to renege on their commitments to reducing greenhouse gas emissions in line with the Paris Agreement.

Communities can be resilient to climate change, slow onset climate disasters, such as sea-level rise, drought, failed harvests and loss of biodiversity, but this takes money and political will.

The study calls for strong leadership and ambition from developed countries to cut emissions and support for developing countries to adapt to climate change and recover from climate disasters.

It has also recommended a holistic approach that places the onus on rich countries to provide support and urges developing countries to scale up efforts to protect people from climate impacts.

The study also revealed that in all five South Asian countries, women are left dealing with the negative fallout from climate migration. They are left behind to take care of household chores, agricultural activities, look after children and elderly and manage livestock, it said.

Women who migrate to urban settlements are often then forced to take up work in precarious settings where workers' rights violations are rife.

"The work we have done here represents a deeper dive of the type Groundswell was meant to inspire, focusing the attention on to specific locations that are likely to experience major climate related disasters," Bryan Jones, an assistant Professor at the Marxe School of Public and International Affairs, Baruch College, has been quoted as saying by Indo Asian News Service.

International Migrants Day is observed annually on 18 December. According to the UN, migration is a global phenomenon driven by multiple forces including aspirations for dignity, safety and peace.

On 4 December, 2000, the United Nations General Assembly, taking into account the ever-increasing number of migrants in the world, proclaimed 18 December as International Migrants Day.

KATHMANDU, Feb 5: A study has found that one-third of glaciers in the Hindu Kush Himalaya (HKH) region will melt by... Read More...