More than 60 killed in extremist attack on Nigeria villagers 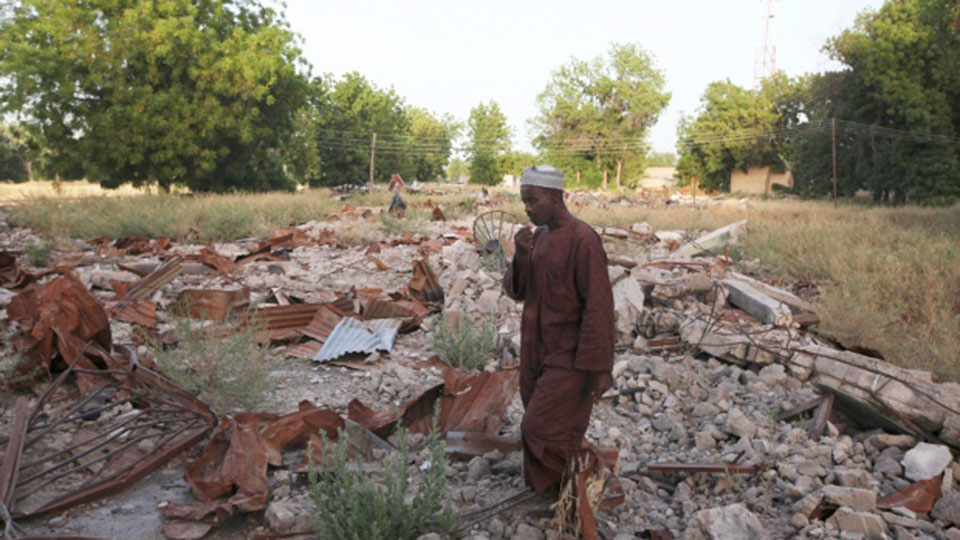 In this Friday Nov.12, 2010 file photo, an unidentified man stands on the remains of the destroyed Boko Haram mosque in Maiduguri, Nigeria. Suspected Boko Haram extremists have killed more than 60 people in a funeral attack this Saturday. (AP Photo/Sunday Alamba, File)

MAIDUGURI, Nigeria, July 29: Suspected Boko Haram extremists killed more than 60 people in an attack on villagers leaving a funeral in northeastern Nigeria, a local official said Sunday. It was the deadliest extremist attack against civilians in the region this year.

Muhammad Bulama, council chairman of the Nganzai local government area, told reporters that 11 other people were wounded during the attack at midday Saturday.

He called it a reprisal after villagers and civilian self-defense forces fought off a Boko Haram ambush in the area two weeks ago, killing 11 extremists.

Nigerians last week marked the grim 10-year anniversary of the Boko Haram insurgency, which has killed tens of thousands of people, displaced millions and created one of the world’s largest humanitarian crises. The extremists are known for mass abductions of schoolgirls and putting young women and men into suicide vests for attacks on markets, mosques and other high-traffic areas.

The extremists, who seek to impose a strict Islamic state in the region, have defied the claims of President Muhammadu Buhari’s administration over the years that the insurgency has been crushed. The violence also has spilled into neighboring Chad, Niger and Cameroon.

Nigeria’s military did not immediately comment on Saturday’s attack.

Bunu Bukar, secretary of the Borno Hunters Association, a self-defense group, said the extremists roared up on Saturday on motorbikes and opened fire on villagers returning from offering funeral prayers for a relative. He said his colleagues had recovered nearly two dozen bodies.

Bana Musa, who also serves on the local council, told The Associated Press that some people managed to escape the gunfire.

MAIDUGURI, Nigeria, Oct 23:  Authorities in northeastern Nigeria say 13 people have been killed by a suicide bombing in Maiduguri. ... Read More...

UAE, June 18: A Nepali citizen, who had come here in search of a job has died from heart attack... Read More...