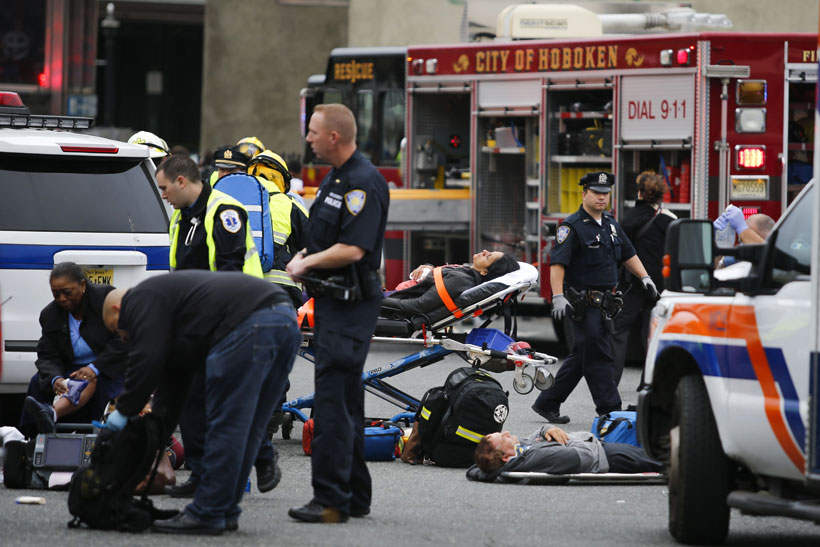 HOBOKEN, United States, Sept 29: A packed commuter train crashed into a station in New Jersey during the morning rush hour Thursday, with three people reported killed and more than 100 injured, many of them in critical condition.

The train failed to stop as it pulled into Hoboken station,, causing major damage to the transit hub just over the Hudson river from Manhattan.

Michael Larson, a New Jersey transit employee, told CNN the train hit a concrete block at the end of the line with such force that it went airborne -- hitting the roof and causing it to partly collapse.

"We have 100 plus injuries," Jennifer Nelson, a New Jersey transit spokeswoman, told reporters at the scene, adding that there were "multiple critical injuries."

Nelson said there were around 250 passengers on the train at the time of the crash, which occurred at around 9:00 am (1300 GMT), and that it was not known if there were still people trapped on board.

Passengers quoted by US media described the train ramming at full speed into the bumper at the end of the track.

"We never slowed down," Jim Finan, a commuter from New Jersey, told Fox. "We ploughed, I mean, right through the bumper."

"Afterwards there was some panic. People were trying to smash some windows out."

Finan said it was an unusually crowded morning.

"Everyone who was standing kind of went flying," he said. "I saw a lot of head injuries and kind of people with cuts."

Nelson told reporters it was not known how fast the train was travelling as it entered the station, and that an investigation was ongoing.

"We're looking at all things that could have caused this accident," she said.

Emergency vehicles converged on the scene in response to the crash.

Pancho Bernasconi, Getty's director of photography for news who arrived at the station just after the crash, told AFP he saw people running as he arrived on the scene.

There was "a lot of damage" to the station. "Part of the roof has collapsed."

Video on social media showed the station in shambles with the traintangled in wires and debris from what appeared to be collapsed portions of the roof.

Other passengers described a scene of chaos with dazed and bloodied people making their way to safety.

"We crashed, and the lights went out. A few people screamed," Leon Offengenden told CNN.

"It was pretty chaotic. And people just in shock and everybody has photos and cameras out and iPads. It was pretty intense. I took a few snaps and video posted online," he said.

The last major train crash in the United States was in May 2015, when an Amtrak train linking Washington to New York derailed in Philadelphia, leaving eight dead and 200 injured.