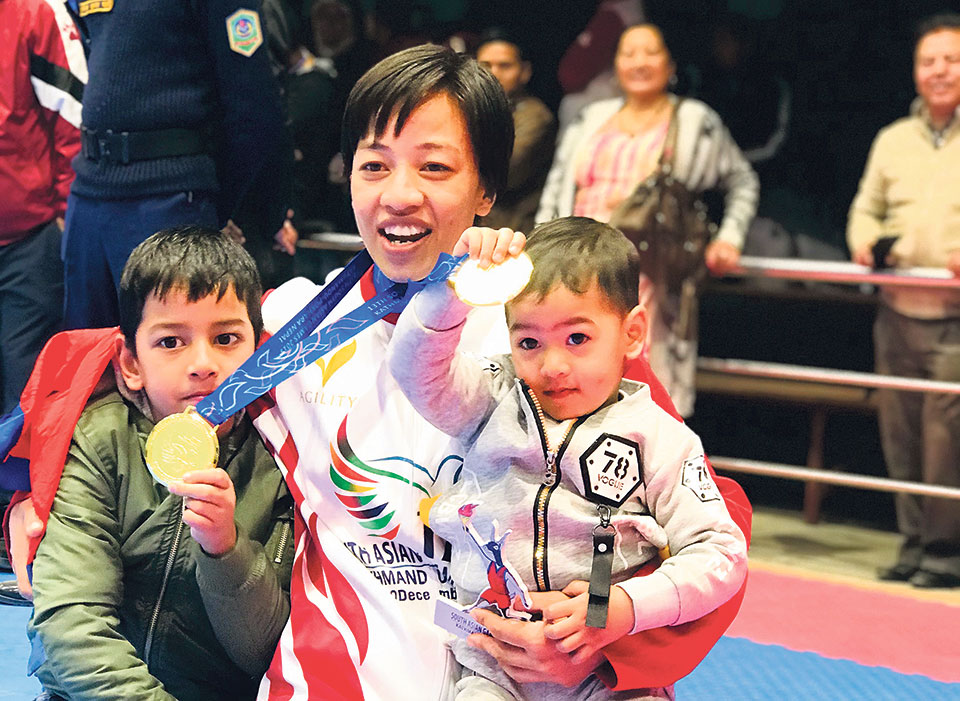 Ayesha with her children after winning two taekwondo golds at the ongoing South Asian Games on Monday. Photo: Republica

KATHMANDU, Dec 3: Ayesha Shakya, a mother of two, has won gold in the above 29 years age category of the individual Taekwondo Poomsae and for the team event of the same category held at Satdobato Sports Complex, Lalitpur Monday, to lead Nepal’s barrage of gold during the 13th South Asian Games (SAG).

She labeled as ‘a dream come true’ her triumph with two golds on the second day of the 13th edition of South Asia’s biggest sporting carnival.

“I was nervous at first. I made a mistake. I could see my dream shattering in that fraction of a second but I was lucky to have eventually won the gold against my final opponent,” said Shakya in a conversation with Republica after the match.

Shakya then went on to win her second gold of the day with Sanjib Kumar Ojha in the above 29 category pair Poomsae, with 8.16 points. The pair overcame Pakistan’s mixed duo of Nisha Maharoon and Shahbaz Ahmed, who settled for silver with 7.86 points.

Previously, Shakya had taken a two-year hiatus back in 2012 before returning with flying colors to secure gold at the 2nd Mt Everest International Open Taekwondo Championships held at the National Sports Council covered hall in 2014.

Similarly, Kaji Shrestha dedicated his two gold medals in Karate in the 13th SAG to his newborn daughter. Shrestha won gold in individual and team events at the Karate Covered Hall at Satdobato Sports Complex, Monday.

Shrestha credited his training and self-confidence for securing gold. “I always believed myself to be no less than any other opponent. I would like to dedicate this award to my daughter, my club and all well-wishers.” He had won gold in the Eighth National Games also.