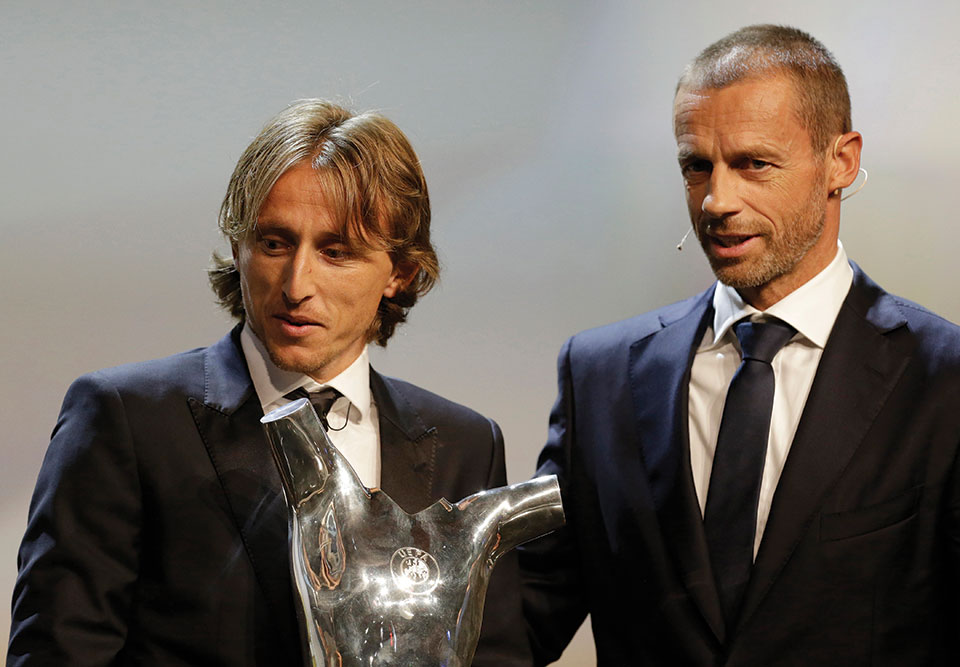 Luka Modric holds his UEFA Men’s Player of the Year trophy as he stands next to UEFA President Aleksander Ceferin during the UEFA Champions League draw in Monaco, France on Thursday. Photo Courtesy: Ap/Rss

MONACO, Aug 31: Real Madrid and Croatia star Luka Modric on Thursday received the accolade of UEFA Player of the Year in Monaco, beating his former teammate Cristiano Ronaldo and Liverpool’s Mohamed Salah to the prize.

“I’m very happy to receive this great prize. I have worked hard for this, to get to the highest point possible,” said Modric, who starred in the Real side that won the Champions League for the third year running before also leading Croatia to the World Cup final.

“I can say for sure that this has been the best year of my career, collectively and individually, and I am enjoying the moment,” added the 32-year-old, who was announced as the winner of the prize after Thursday’s draw in Monaco for this season’s Champions League group stage.

Modric started out at Dinamo Zagreb and then had four years with Tottenham Hotspur before Real prised him away six years ago.

His success here, after he was named the best player at the World Cup, confirms that he should be among the favorites to win the Ballon d’Or, a prize dominated by Ronaldo and Lionel Messi over the last decade.

Salah was in attendance at the Grimaldi Forum on Thursday, but Ronaldo, now with Juventus, was not there.

“I’m sorry that he couldn’t be here. I am sure there is a reason why he couldn’t come. I would have liked to see him. Hopefully we will see each other soon somewhere else,” said Modric of his old colleague.

Modric has also been linked with a move away from Real this summer, with Inter Milan said to be keen on him, but he claims to be more than happy in the Spanish capital.

“As I have always said, I am at the best club in the world, where I want to be. I am not just happy but very happy to be here.”

Real’s achievement in winning yet another Champions League last season was further recognized as Modric also won the UEFA award for the best midfielder of last season.

Ronaldo, in his absence, was awarded the prize for best striker chosen by Champions League and Europa League coaches from last season and journalists.

The award “recognizes the best players, irrespective of nationality, playing for a club within the territory of a UEFA member association during the past season.”

Wolfsburg lost to dominant French outfit Lyon in the Champions League final in Kiev in May.

There was also an award for David Beckham, the former Manchester United, Madrid and England star collecting the UEFA President’s Award for his achievements in the game and his work since retiring as a player.

'I can't breathe' protests heat up as curfews imposed in several U.S. cities
39 minutes ago

A family of 18 says corona is overrated
2 hours ago

LIVE: Meeting of House of Representatives underway
4 hours ago