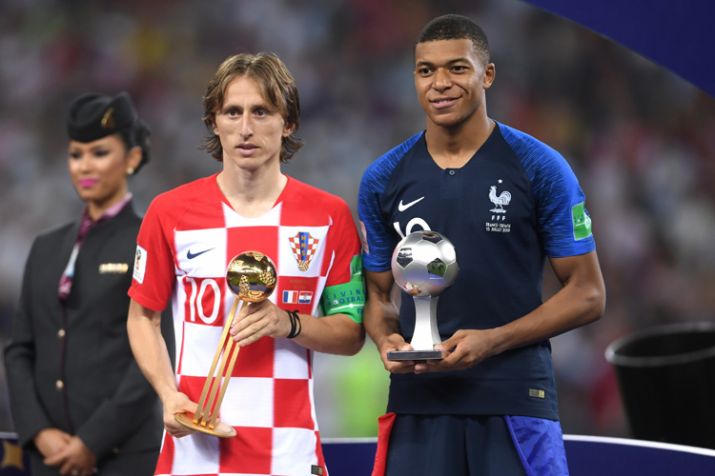 PARIS: Luka Modric and Kylian Mbappe are in the running to break Lionel Messi’s and Cristiano Ronaldo’s 10-year dominance of the Ballon d’Or.

The World Cup finalist and champion, respectively, have been named among 30 nominees for the men’s trophy awarded by France Football magazine to the best player in the world.

Portugal captain and Juventus forward Ronaldo has won the award for the past two years and five times in all, a record he shares with Argentina’s Messi.

Ronaldo’s nomination comes after the 33-year-old last week denied rape allegations levelled against him by a woman who sued him in court in the United States.

Sportswear maker Nike Inc and video game maker Electronic Arts Inc, who both have worked with the five-times Champions League winner, said last Thursday they were concerned about the allegations.

Modric, a World Cup runner-up with Croatia, won the Golden Ball as the best player at this year’s World Cup in Russia and last month beat Ronaldo and Liverpool’s Mohamed Salah to claim FIFA’s The Best men’s player award after Messi was surprisingly left off the final three-man list.

Bale, who scored two goals in Real’s triumph in the final of the Champions League against Liverpool including a spectacular overhead kick, is joined by club team-mates Karim Benzema, Raphael Varane, Isco, Marcelo and Sergio Ramos.

Mbappe won the World Cup for France in Russia, where he became the first teenager to score in a final since Pele in 1958. France beat Croatia 4-2 in the final. He also helped Paris St Germain to a domestic treble last season.

Among prominent names who did not make the cut was PSG goalkeeper Gianluigi Buffon, who finished fourth last year but was penalised by Italy’s absence from the World Cup.

For the first time, a Ballon d’Or for women players will be awarded this year, with Champions League winners Olympique Lyonnais accounting for seven of the 15 nominees.

Brazil’s Marta, crowned best women’s player for a record sixth time at last month’s FIFA awards, is also in contention after her role in winning the Copa America.

In another first, the best under-21 player will receive the Kopa Trophy. Mbappe is the favourite.

The Ballon d’Or, which was first won by Englishman Stanley Matthews in 1956, is decided by a ballot of journalists from around the world

The award merged with FIFA’s World Player of the Year prize from 2010-15 to create the FIFA Ballon d’Or, but returned to France Football in 2016 while FIFA established The Best awards.

The winners of the prestigious men’s and women’s awards will be announced at a ceremony in Paris on December 3 in Paris.