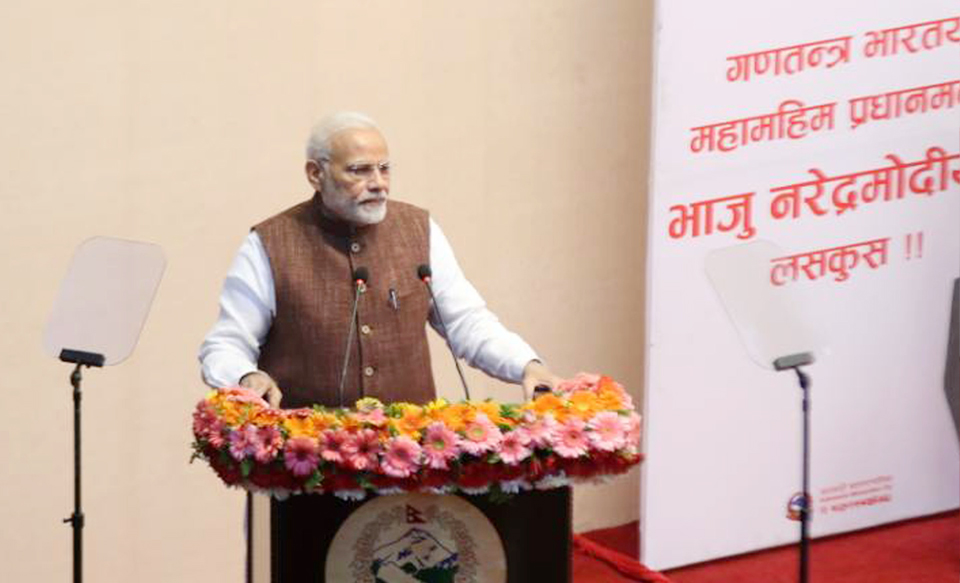 He also congratulated Nepal for the constitution that reshaped Nepal’s political history by embracing federal system. “Since 2015, Nepal isn’t just rebuilding after the earthquake, it also is reconstructing its political history,” Modi said adding that India would always become partner to Nepal’s progress.

“Nepal is a country of diversity and Kathmandu is a world in its own,” Modi said after receiving civic felicitation by the Kathmandu Metropolitan City at City Hall today. “The diversity gives fresh air to any outsider,” he said.

As Modi praised Kathmandu’s historical, cultural, religious and artistic diversity and applauded the three tiers of elections, Modi cautioned, “Nepal has a long way to go and as the country heads towards development, it must identify its priorities to deliver results.”

Minister of Foreign Affairs, Pradeep Gyawali said that Nepal and Kathmandu could learn from India’s development, especially in terms of cleanliness campaign and establishment of smart cities in a federal setup.

Upon receiving civic felicitation, Modi said that he was extremely honored in the city that always lured him. “Kathmandu has always lured me by its diversity, depth and progressive attitude,” he said adding that he’d soon visit Lumbini, birthplace of Lord Gautam Buddha.

On our own again

We had an earthquake and our government was nowhere to be found for a few days while we, the people,... Read More...

KATHMANDU, May 10: Ambassador of European Union to Bangladesh Rensje Terrink has recalled 'Blockade' imposed by India after the Mega earthquake... Read More...