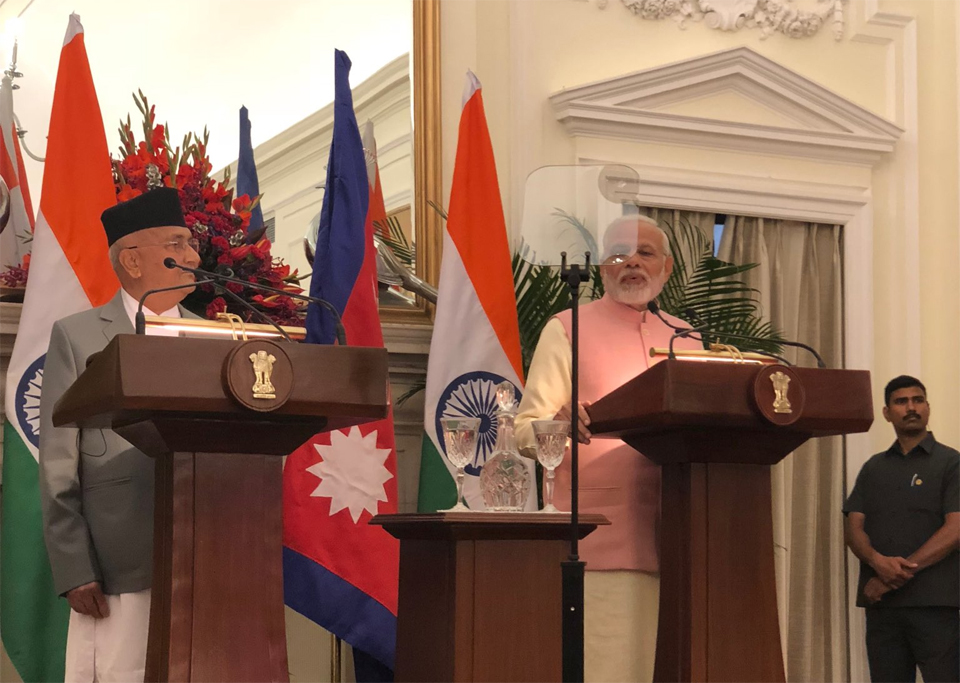 KATHMANDU, April 7: Prime Minister KP Sharma Oli and Narendra Modi have agreed to assist one another for economic prosperity and development.

The two premiers shared views in improving cross border connectivity while ensuring neither of the countries brewed activities against the other; including illegal activities in the southern border.

The prime ministers lauded both of the country’s historic friendship of shared culture, tradition and a political relationship. “To further strengthen our past relations and the future, we will work to increase connectivity through railway to Kathmandu,” Modi said adding that it would help to boost trade and deepen people to people relationship. In addition, Modi said that the inland water navigation up to an Indian port would help Nepal to bolster trade.  “Nepal was never landlocked. It was land linked,” he said.

Modi added that India was always committed to Nepal’s prosperity and that the country was willing to join hands with Nepal “in areas that are aligned with Nepal’s priorities.”

“We also are committed to speed up past projects, including the Arun III, Pancheshwor and Sun Koshi hydropower while setting up new partnerships in agriculture and organic farming,” Modi said.

PM Oli added that “both the countries aimed to reach new heights of friendships in line with changing context to create a ‘model relationship based on equal prosperity that is cherished forever.’

The visiting premier added that following the end to political stability, Nepal now leaping forward to economic prosperity and development. “Nepal plans to graduate into middle income countries by 2030,” Oli had said to Indian businesspersons as he lured them for investment in Nepal.

Oli added that destiny of both the countries was intertwined and aspiring for prosperity was common to both the nations. “Nepal has ample untapped resources and this is our opportunity to cash it for development,” he said.