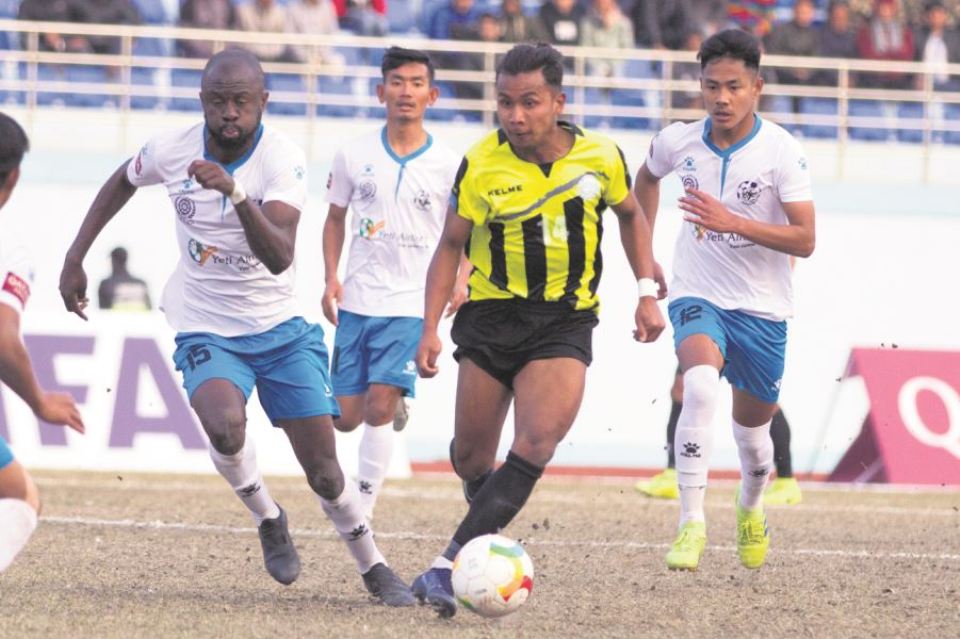 Earlier on the day, Machhindra Club inflicted a first defeat on Jawalakhel Youth Club as it won the game 1-0 thanks to a Bishal Rai strike in the first half.

It was Himalayan Sherpa’s fourth draw of the season, and also the fifth game where it has not been able to score a goal which included two losses.

Manang was limited to 10 men after Suraj Bishwokarma was shown a direct red card for a foul of Stephene Samir in the 72nd minute.

Manang missed a lot of chances to score throughout the match, and was hard done by since the forwards had an off day and missed them.

The title holder was on attacking mode from the first whistle, but Himalayan Sherpa defended well and took charge of the right wing to pressurize Manang in the early period.

Tridev Gurung got a chance for Himalayan Sherpa in the fifth minute of the match, but his shot from outside the box was off target.

Manang then switched its gear to attacking football again with a good passage of passing play. Jiwan Gurung got the ball in the final third, he chipped the keeper, but Himalayan Sherpa defenders cleared the ball to safety in the 12th minute.

Manang missed several chances in the first half, while Himalayan Sherpa was looking to attack the holder from crosses, but the Manang defenders cleared the ball again.

It was a clever technique of free-kick from Himalayan Sherpa as four players stood behind the ball. Man Bahadur Tamang looked to hit a shot, but the ball went off target in the 20th minute.

Kamal Shrestha produced a good free-kick in the 23rd minute for Manang, but a header from Bimal Rana went over the bar.

It got another quick chance again two minutes later as Rana fed a good ball to Femi Joshua, but his shot was brilliantly saved by goalkeeper Kishor Giri.

Himalayan Sherpa got a chance from a free-kick in the 33rd minute, but a header from Samir was off target.

The team kept on creating attacking chances one after another, but could not capitalize it and was left frustrated by the poor finishing from the forwards.

Bijaya Shrestha was looking really good in the second half with his through balls and passes forward, but Samir kept on missing the chances.

Manang’s Vidal Luis nearly scored in the 71st minute, but a double save from keeper Kishor Giri was enough to deny him.

Even after going to 10 men, Manang kept hold of the possession and controlled the game, but could not score a goal.

Himalayan Sherpa nearly utilized a man advantage as Bijaya looked to be well through toward goal, but keeper Karki came off the box and cleared the ball in the 84th minute.

Rana had a chance to score in the first minute of the seven minutes of additional time, but his right-footed shot was off target.

Himalayan Sherpa also got its chance in the injury time, with a shot from Suraj Hamal, but Karki was superb again with his shotstopping to deny him in the third minute of the added time.

With the result, Manang is third with 12 points from six matches with three wins and three draws, while Himalayan Sherpa Club is 11th with four draws and two losses.

In the other game, Machhindra defeated Jawalakhel 1-0 as Bishal Rai scored a goal few yards off the box in the 31st minute to register the team’s fourth win and reach the top of the table leaving Manang and Tribhuvan Army Club one point behind.

Machhindra was authoritative in possession throughout the match as it controlled the game very well, pressed high up the pitch and looked for crosses through the flanks.

With the result, Machhindra is top with 13 points from six matches with four wins, two draws and is yet to lose a game this season. Likewise, Jawalakhel is fifth with nine points from two wins, three draws and a loss.

Hearing on petitions against President today
11 minutes ago